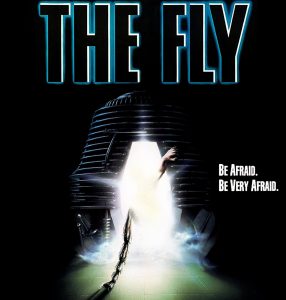 This week on the Silver Emulsion Podcast, Stephen and I talk about David Cronenberg’s most successful film, 1986’s The Fly! Fuse your DNA and enjoy! 🙂

Watch The Fly along with us on Blu-ray, DVD, iTunes, or Amazon Instant Video!

Just a few months before unleashing The Brood, Cronenberg released this love letter to drag racing. It is easily the least “Cronenbergian” film from him I’ve seen, but even if I didn’t go into it knowing he loved cars, Fast Company would’ve told me as much. The film’s cinematography is superb, capturing wonderful, wide vistas of the Canadian roadways, as well as close-up shots of gleaming engines, smoking tires and all kinds of other machinery. I was especially taken by an intense close-up of a spark plug gap being checked. Also of specific note is an in-car shot of a complete funny car run, with a timer on-screen to further add to the wow factor. I’m not an experienced fan of drag racing, so I was quite impressed with the speed and the precision with which everything is carried out. The film’s story is relatively cliched, and it gets super campy — AKA Fun! — as it goes along, but during the racing segments it actually feels closer to a documentary. It is real cars with real drivers doing some real racing, after all. I think it would be a fine choice for a rumbling double feature with Mad Max: Fury Road. Plus there’s a Springsteen-like theme song, what more can I ask for? Anyone that loves cars, specifically when they were hulking beasts of steel and thunder, should check this forgotten gem out.

As I worked my way through Cronenberg’s films, I was eager to re-visit his take on The Fly. It was the first Cronenberg film I saw (as a kid sometime in the late ’80s), and all I remember from that viewing was that I thought it was really weird. I didn’t know how to comprehend or process it. Then I watched it again about 10 years ago, and while I liked it a lot more that time, it still felt kind of emotionally cold and I couldn’t get into it completely. When I look back on these experiences after this most recent re-watch, I’m shocked at myself. The Fly is one of Cronenberg’s greatest achievements, and the FX work that slowly transforms Jeff Goldblum into the Brundlefly is absolutely exquisite. My journey with the film is a testament to re-watching films at different ages; the Brundlefly may evolve rather quickly, but it takes much longer for a human such as myself. Sometimes you see a film too early for it to resonate, and thankfully when I watched it this time it felt exactly right.

Dead Ringers is an interesting film for Cronenberg to make directly after The Fly. Where that film went hard into the grotesque, Dead Ringers is reserved and intensely psychological. I must say that I prefer the methods of The Fly, but Dead Ringers succeeded in winning me over despite this. Jeremy Irons plays twin gynecologists, and it’s this absolutely riveting dual performance that glues you to the screen. Irons manages to create two distinct, believable characters, and Cronenberg somehow managed to often include them in the same shot without any hint of optical compositing or other visual trickery. It’s really something to see. Definitely a weird movie, though, so I don’t know who I’d recommend it to other than people who are already Cronenberg fans.