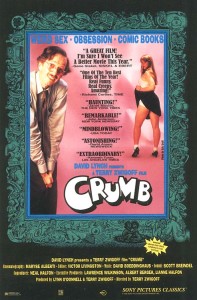 Expectations: High. I remember loving this.

Well, once again I find myself staring at the blank, white screen of Notepad wondering what to write. This is the second time I’ve seen Crumb, and it’s definitely an interesting film to revisit. I first saw it in 2004, and it was my introduction to the work of Robert Crumb. I remember being fascinated by his art, and how the film depicted him and his brothers very honestly. This time around those same things stuck out to me, but the underlying theme of the film — the question of the line between art and pornography — was something I don’t remember focusing on before.  This is a huge reason why re-watching films like this is such a rewarding experience, as the film easily takes on a new life when seen through more mature eyes.

The film succeeds primarily because of Robert Crumb’s inherent charm and director Terry Zwigoff’s ability to capture raw moments, seemingly without influencing them. The first section of the film is spent laying the foundation of who Crumb is and how he started, but as it goes on it begins to subtly explore Crumb’s fascination with women, and his hatred of them. In his work, he’s always been very open and honest about the feelings that populate his mental world, and the film does its best to capture reactions to these feelings on both sides of the argument. But Crumb never seems malicious towards his wife, although at one point he tells an ex that the only woman he’s every truly loved is his daughter. This is obviously a pretty harsh thing to say, and as Crumb laughs it off with a genuinely good-natured smile, I got the feeling he was fucking with us a bit.