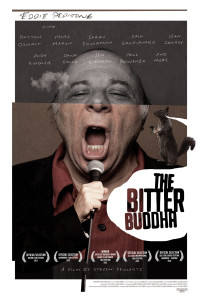 The prospect of reviewing The Bitter Buddha is fairly distressing to me. I first heard Eddie on Marc Maron’s WTF podcast and couldn’t believe that I hadn’t already heard of someone as hilarious as him. Later, I learned that Eddie was the recurring heckler character on Conan that I always loved, so that made me feel a little better. If I didn’t know his name, at least I knew his raving voice. I’ve become a big Eddie Pepitone fan over the last few years, and have followed along with the film’s production vicariously through Eddie’s social media and whatever mentions it got on Eddie’s podcast, The Long Shot. I know many of the stand-up bits featured here, and I’ve heard all the audio versions of the podcast stuff. So sitting down to watch the film feels somewhat like watching a movie that I was around for the production of. In the age of Internet entitlement, all we have to do to be a part of something is to merely experience it through a pair of tinny ear buds. There is clearly no hope for the human race.

The Bitter Buddha chronicles a few months in the life of Eddie Pepitone, one of the funniest guys ever to hit the stand-up stage. And when I say it chronicles a few months, I mean it. The film never delves much into Eddie’s past. There’s never any narration to guide us through his troubled early years in comedy, nor is there a touching 10-minute version of his childhood. The Bitter Buddha is laser-focused on the present (which in this film was 2011) and it only seeks to give you a picture of who Eddie is and what his career is like now. Which is to say, it details a lot of anger, frustration and tweeting. But there’s also cat and squirrel feeding, which offers a wonderful example of Eddie’s duality. When told that Eddie visits the park to feed squirrels, Patton Oswalt simply can’t imagine the scene. His first thought is Eddie viciously throwing nuts at the squirrels. But, of course, this isn’t the case, as Eddie harbors a genuine love of animals and of life’s small details, relishing a quick moment when a squirrel’s paw touches his gift-giving hand.