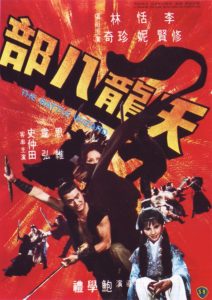 Duan Zhengchun (Si Wai) is a prince of the Dali Kingdom, and he’s quite the ladies’ man. We meet him in the bed of Qin Hongmian (Gam Lau), who informs him that she is about two months pregnant with his child. She asks for his help in the matter, since her husband has been away for many months and she cannot easily explain the baby away as his. While wrestling with this, her husband, the Yellow Robed Man (Shut Chung-Tin), bursts in, exposes their affair, and starts a fight with Duan. All this is fairly normal for any film, wuxia or not, but here comes the twist: Duan fights back with his family’s ancient technique, the Yi Yang Finger. This is basically a precise, slicing laser that shoots out of Duan’s finger, and it’s incredible. The laser slices off the Yellow Robed Man’s legs, but since he’s badass he vows his revenge in 20 years before escaping and seeking refuge to heal his horrific wounds. We then pick up the tale 20 years on, when Duan’s son, Duan Yu (Danny Lee) is grown, and the Yellow Robed Man has augmented himself with extendable, metal legs (with clawed chicken feet) and lives in a dank, psychedelic cave with his crab-clawed monster henchman. See, within a matter of moments we went from standard wuxia fare to WTF, and I couldn’t have been happier.

Amidst all these wild characters and magical feats, our hero Duan Yu stands in opposition of the martial world. He loves scholarly book learning, and sees no need for martial knowledge. His father tells him that he won’t be able to survive in the world without martial arts, so in defiance of this, Duan Yu sets out to prove that he can survive on book learning alone. I don’t know that the movie has anything to say about this in particular, because Duan Yu does end up becoming adept in the martial arts, but he does so in unique ways that wouldn’t have necessarily been available to someone with a more traditional outlook on the martial world. In any case, Duan Yu is a fun character who subverts traditional martial heroes. It’s a theme that seems to be recurring in Jin Yong’s work, with both The Brave Archer and Kung Fu Cult Master featuring characters who similarly gain abilities through non-standard methods. Duan Yu is a more comic hero, though, and his stance on the martial world adds a fair amount of intentional comedy to the film, as well. The disparity between the naive hero and all the martial wizards in the film is funny, just in and of itself. There’s also the campiness that will add unintentional humor for those who laugh at such things, but for me I thought it was all very well-realized within the context of the times. It’s even more impressive knowing that this wasn’t one of Shaw’s big-budget, top-tier titles, too.

I mentioned the wild insanity of The Battle Wizard, and I mentioned its 73-minute runtime, and when you combine those things you get one of the most jam-packed, lean movies in the history of film. This movie is so constant in its assault of wuxia magic that you’ll think it’s a much longer movie than it is. It’s just so dense with craziness that no one would fault you for pausing the film every few minutes to catch your breath and process everything that just happened. Towards the end, you feel like you’ve seen it all and then some, and at this point the film introduces an imprisoned gorilla trained in kung fu. Suddenly the gorilla and his animal friends in Jeff Lau’s Eagle Shooting Heroes (a comedic adaptation of The Legend of the Condor Heroes) don’t seem so out of left field; apparently, it’s just the way Jin Yong wrote stories!

Amidst all the insanity, though, there isn’t a lot of actual hand-to-hand martial arts going on. It is merely one arrow in the movie’s quiver, and it’s doled out in equal parts with the rest of the grand buffet. The film was choreographed by the same team responsible for Chor Yuen’s films — Tang Chia and Huang Pei-Chih — so the quality is there when it counts, it’s just that the majority of the focus is on the special FX. For this reason, I wouldn’t recommend the film to a casual fan of Hong Kong movies, or anyone who is only interested in seeing traditional martial arts fights. There are flashes of that throughout, but it’s almost always augmented by something else. For instance, Danny Lee trading blows with the gorilla, or the Yellow Robed Man fighting with his Inspector Gadget, extend-o chicken legs. After hundreds of Shaw films with swords and fists as the main weapons, I welcome one with magic lasers and other assorted martial spells at the forefront.

I absolutely loved every minute of The Battle Wizard. My only complaint is that the Shaw Brothers did not follow the film with sequels! The novel was adapted into multiple TV series, and twice more for cinemas (in 1982 and 1994), but I doubt that any of these will truly capture the colorful aesthetic and psychedelic WTF fun of The Battle Wizard. If nothing else, though, Shaw did make a lot of FX-focused wuxias in the late ’70s & ’80s, so I must merely appreciate this film as a spiritual predecessor of Bastard Swordsman and others like it. It probably goes without saying, but anyone who likes those films should thoroughly enjoy this one, too.

Next up in this chronological journey through the Shaw Brothers Martial Arts catalog is Chor Yuen’s The Sentimental Swordsman! See ya then!