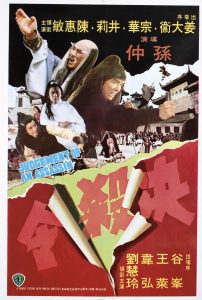 Judgement of an Assassin sees director Sun Chung re-inserting himself into the newly revitalized wuxia genre. He made one of my all-time favorite Shaw wuxias, 1972’s The Devil’s Mirror, but his filmography is devoid of wuxias up until Judgement of an Assassin. To say that I was eagerly anticipating this film is underselling it some, especially because the next year Sun went on to make The Avenging Eagle, a film I happened to catch in the theater some years ago and have been in love with ever since. Judgement of an Assassin had a lot to live up to, and it absolutely stood up to the challenge. It is a wuxia that feels unique amidst the vast Shaw catalog up to this point, and it is sort of a middle ground between the brooding darkness of Chor Yuen and the comic book sensibilities Chang Cheh brought to life in The Brave Archer. It is also a return to the general fun of early Shaw wuxias, but with all the excitement and thrills of 1977 choreography. Like previous Sun Chung films, Judgement of an Assassin has immediately endeared itself to me, and I see it becoming a favorite I’ll return to often.

Masked assassins raid the home of the Golden Axe Clan, but when the final blow is dealt to the clan leader, the assassin boldly states his name for the record. Surely, this has to be a setup, right? Who would do that? The named man is arrested for this crime and placed inside a spiked coffin designed to limit the prisoner’s movement and torture him simultaneously. He is taken to the house of Madam Fa (Wang Lai), who will preside over the grand hearing to determine his fate. The entire martial world converges on the trial, with some members utilizing the opportunity to jockey for power, while others attempt to uncover the truth of the murder on their own. Like any good wuxia, Judgement of an Assassin is filled with many colorful characters, but here the main character is actually the martial world itself. It’s a great choice to tell this particular story, though I can see some not connecting with it if you’re looking for a more conventional film.

While there is no true lead character of the film, there is a lead villain. Played by Michael Chan Wai-Man, the Bloody Devil is one of those great villains that you just can’t get enough of. I’d watch a whole movie about this mysterious character, although I suppose he wouldn’t be so interesting and mysterious if I did that! Anyway, he’s a fantastic character for the heroes of the martial world to fight against, and Chan perfectly portrays the character’s understated, yet immensely powerful nature. The film’s editors and Sun Chung help him look as supernaturally gifted as possible, but Chan’s performance is what truly makes the character pop. It also doesn’t hurt that he gets to play off a cast filled with wonderful Shaw actors like David Chiang, Ching Li, Ku Feng and many more!

A great setup goes a long way, as does a great villain, but a martial arts movie needs to deliver the action-packed goods if it wishes to truly succeed. This is probably where I was most impressed with Judgement of an Assassin because it packs in a lot of great fights along with its story. It takes the style of the more action-packed, classic Shaw wuxias and throws it into a martial world similar to what Chor Yuen revitalized the genre with, which is pretty much everything I could ask for at this point. I always lament that Chor doesn’t indulge the action side of things enough in his movies, so along came Sun Chung to put things right for me.

The two filmmakers shared the choreography team of Tang Chia and Huang Pei-Chih, so their films also offer a great example of what difference a director can make in the realization of a film’s action. Chor favors more supernatural-leaning action, making it feel like an equal collaboration between the choreographers, the performers, the director and the editor. Sun’s action is much more focused on the classic duo of choreographer and performer. Sun uses lots of wide shots and longer takes of martial performance that allow more complex choreography shine. I guess you could say that Chor Yuen is following the lead of King Hu, while Sun Chung is more of a Chang Cheh-style action filmmaker. If this holds true, I’m sure to become quite the Sun Chung fan.

Judgement of an Assassin feels like an underseen film, and that should definitely not be the case. With its near-perfect combo of entertaining action and a beautifully structured story, this is a movie that all Shaw Brothers fans should see. I hope Celestial sees fit to release it to digital so it can be more readily available to everyone interested.

Next up in this chronological journey through the Shaw Brothers Martial Arts catalog I’ll be reviewing a non-Shaw box office hit for context: Sammo Hung’s directorial debut The Iron-Fisted Monk! See ya then!