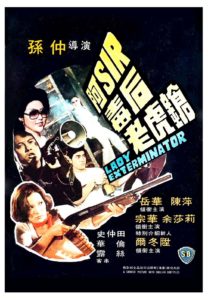 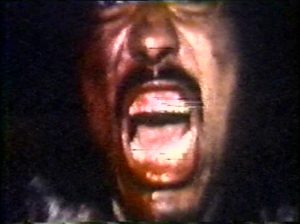 I must admit, this is a phenomenal set-up for a ’70s exploitation film. Parts of this film, specifically the action, live up to the promise of this set-up, but I found the connecting bits to be far from enjoyable. The story is about as standard and boring as they come. My attention did waver, so perhaps I missed key connections, but other than Gao hooking herself on heroin, nothing felt unique or all that interesting. I had a similar problem with The Sexy Killer because it was a remake of Coffy, but I was unable to determine if Lady Exterminator was also based on another film. I suspect not, but it’s possible.

My disconnect is certainly not only due to the story’s lack of originality. Sun Chung excellent camerawork is completely buried here; the cinematography is reduced to a washed-out glow within a limited palette. Together with the lack of widescreen, any beauty there was in the imagery is completely obliterated. I doubt it would suddenly become a masterpiece in a fully restored state, but it couldn’t hurt! I don’t foresee a restoration actually happening, so I’ll just have to watch it again and try to parse out as much as I can of the film’s technicality. These elements are part of my foundational love of film, so in their nearly complete absence I flounder a bit if the story doesn’t hook me. Lady Exterminator is a like a worst-case scenario for me, with every personal hindrance to enjoyment all converging into one experience. 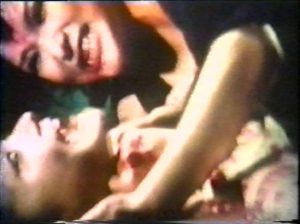 If nothing else, the action is often fantastic, even in its weakened state. Chen Ping is ferocious in the role, and her fight with Shirley Yu is the standout scene of the film. As with the opening, it almost feels like you’re watching a real fight. Sun Chung’s love of slow motion shines through the murk and provides small moments of bliss, as well. The slo-mo punctuates the action beautifully, often showcasing the film’s many high falls and other great stunt work. With choreography by Tang Chia and Huang Pei-Chih, I’m sure whatever was lost in the horrid print was great, too.

I persevered through Lady Exterminator, and at its best the film delivered quality entertainment. Fingers crossed that Celestial someday uncovers the negative in a dank corner of a vault and can restore this New Wave forerunner to its original state. The debut of Shaw Brothers star Derek Yee deserves better!

Next up in this chronological journey through the Shaw Brothers Martial Arts catalog is the next film from Lau Kar-Leung, the one and only Executioners from Shaolin! See ya then!