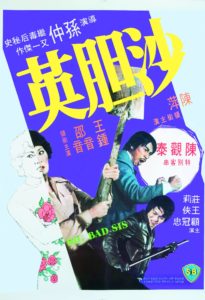 The film will be of special interest to fans of Kuei Chih-Hung’s The Tea House and its sequel Big Brother Cheng, because Big Bad Sis is kind of a side-sequel to those films. How they connect is not necessarily apparent from the get-go so I won’t spoil it, but suffice it to say that Chen Kuan-Tai makes an appearance as his popular Big Brother Cheng character. It’s great to see him in the role again, even briefly, although I have to say that his inclusion is actually one of the things that I think holds the film back from being great. It’s hard to say without spoiling things, but the script is written so that he ends up in a situation that I’d rather have seen resolved without his involvement. I love the character and Chen Kuan-Tai, but some more restraint in how he figured into the plot of Big Bad Sis would’ve been for the best.

More than just being a spin-off, Big Bad Sis reinvents Kuei’s films and transitions the ideas to the feminine perspective very well. The basic, episodic formula of a Big Brother/Big Sister guiding, helping and protecting friends and family is fully intact, but Big Bad Sis is also setup to be an origin story for Chen Ping’s character. We see how she became the way she is, we see her rebellion against the patriarchal structure of her former life, we see the establishment of her new place in the world guided by her frustration and feminism. Chen Kuan-Tai’s character is never afforded this depth, and it leaves Kuei’s films somewhat cold. Big Bad Sis showcases its characters just as much as its social commentary, or its action-packed exploitative elements.

Speaking of the action, it was choreographed by the dynamic duo of Tang Chia and Huang Pei-Chih. The most interesting aspect is that none of the film’s characters are presented as students of the martial arts. There are a number of fights, though, and Tang and Huang choreograph them with a loose brutality that fits the film’s street violence tone to perfection. The struggles are intense and dangerous; you’re never quite certain that our heroes have what it takes to overcome the odds stacked against them. Most of the film was filmed on location as well, adding to the realism and moving the genre closer to its Hong Kong New Wave glory days. This is definitely not as “in the streets” as Jumping Ash was, but it’s one of the better representations of the style within the Shaw catalog. I generally cite Kuei Chih-Hung as the main Shaw forerunner of the New Wave, but I guess I’ll have to add Sun Chung to the list! His camerawork is far more fluid and moving than Kuei’s, incorporating perfectly executed camera moves to capture multiple framings within a single take. This is something every Shaw director was encouraged towards to save on time and money in the editing room, but rarely is it as artistic and exceptional as it is in the hands of Sun Chung. It has appeared in his films prior to this, but the work in Big Bad Sis is the best I’ve seen up to this point in his work.

If you’re interested in Hong Kong crime films, Big Bad Sis is a definite must-see. It’s ridiculously entertaining, it has a great social message, and it’s very finely crafted. Can’t ask for much more than that!

Next up in this chronological journey through the Shaw Brothers Martial Arts catalog is Chor Yuen’s The Web of Death! I understand it’s a remake of The Thundering Sword and it’s based on Heaven Sword and Dragon Saber, so I’m stoked to check it out! See ya then!