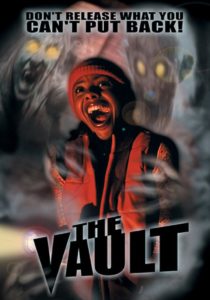 I love the premise and mystery at the heart of The Vault, but the execution holds it back. I can’t point to any one flaw that sinks the film, but if I were to select the biggest it’d be the dialogue. I know this is a low-budget horror film trading in well-worn situations, but the dialogue is often bad enough to suck the life out of an otherwise interesting scene. It’s a shame because the acting is mostly pretty good, with Leopoldo Mandeville as the school’s security watchman and Ted Lyde as Mr. B shining the brightest. The kids are more hit or miss, but they do well in presenting each of their defined character types. 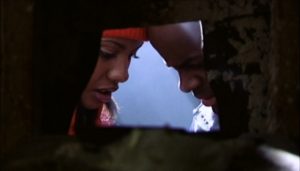 The Vault is the only directorial effort from actor and ex-Cleveland Browns player James Black (who also plays the van driver here), but he does a great job of building an oppressive atmosphere within the derelict Washington High School. His framing and usage of shadows to fill the screen in interesting ways is very well done, and he shoots the vault door in a suitably ominous manner. It’s enough to wish that he had continued down this path and made another movie, but who knows, perhaps one was enough for him. In any case, the film has a good feel to it in terms of atmosphere, as well as some fun, inventive kills, so it’s sort of disappointing the rest of the film doesn’t deliver in the same way.

The Vault is based around an interesting concept that is relatively well-realized, it’s just that the script itself is not up to par. The dialogue makes an otherwise intriguing movie into a hard one to invest yourself in and it’s a shame. I wanted to love this one, and part of my underdog spirit still does, but it’s just not good enough to overcome its faults. I’d still recommend it to low-budget fans, because it is one of the better “urban” Full Moon films, but I think general horror audiences would have a tough time with The Vault.

Next time I get around to a Full Moon movie I’ll be watching the newest Full Moon film: Puppet Master: Axis Termination! I was going to wait until it was out as a movie and not a 3-part series, but whatever, it’s only October once a year! See ya then!