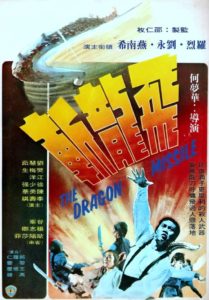 So anyway, Lord Qin Quan has a bit of a problem. There’s a gnarly boil on his back and nothing the doctors have tried has healed it in the slightest. The Imperial doctor informs the Lord that this particular boil is no ordinary boil; it’s the most poisonous of the 72 kinds of boils, and it’s called 100 Birds Worshiping the Phoenix! This kind of insidious poison will kill the Lord in seven days and can only be remedied with the longevity rattan of a thousand years. It is Sima Jun’s task to retrieve said remedy from the only man known to have it: Herbalist Tan (Yeung Chi-Hing) who lives a quiet life in the country roughly two days ride away. Sima Jun sets off as quickly as he can, but the Lord, wanting to ensure the rattan makes it back to him, sends a group of skilled mercenaries along with him. And it would be this lack of faith in Sima Jun that begins the unraveling sequence of events that makes up The Dragon Missile.

The hero of The Flying Guillotine fought for his life against the forces of the evil Emperor, but Sima Jun fights and kills innocents for the evil Lord in The Dragon Missile. His quest is to save the life of a lord who cares nothing for the people he governs. He isn’t a character we should be siding with, nor is he anything like the usual lead character in a wuxia story. This component made The Dragon Missile a very compelling film for me, regardless of the film’s overall quality. Sima Jun is without a doubt a bad guy, but I still felt like rooting for him at numerous times during the film. I love Lo Lieh, so that’s part of it, but it’s more than that. Depending on who he’s on-screen with, he flips between anti-hero and villain. It’s a bold choice, and one that’s far more interesting and engaging than just making a straight sequel to The Flying Guillotine. In The Dragon Missile, we are presented with a morally opposite character to Chen Kuan-Tai’s in The Flying Guillotine, and this sort of decapitating power in the hands of an evil man is frightening to behold.

The other major factor working in the film’s favor is its action choreography from Yuen Cheung-Yan and Tang Chia. The fights are a mix of spinning dragon missiles, swinging swords and swift hand-to-hand strikes, and it’s all choreographed exceptionally well. There is a large-scale brawl that’s a little loose, but when one character is trying to make his way through an entire palace full of guards these things must be forgiven. Besides, it’s not that loose anyway. It’s just that in these moments you can often catch guys in the background waiting for their moment, which is always somewhat scene-breaking once you notice it. In any case, that particular scene is still tons of fun thanks to the wealth of guys smashing through wooden props or splash-landing into the awesome mid-palace lake. This is true of all the film’s fights, too; they aren’t anything too great, but they are all relentlessly fun.

The Dragon Missile may not be as good as The Flying Guillotine or Jimmy Wang Yu’s independent film One Armed Boxer vs. the Flying Guillotine, but it’s a fun film with a charm all its own. The plot is pretty threadbare, but the jockeying between the characters and the race to obtain the rattan for the evil Lord Qin make for a fast-paced film that’s sure to entertain.

Next up in this chronological journey through the Shaw Brothers Martial Arts is Lau Kar-Leung’s second film, the amazing Challenge of the Masters! But October is coming soon, so don’t expect that one until November. In the meantime, I’ll be checking out the 1974 Shin Sang-Ok film The Ghost Lovers! See ya then!