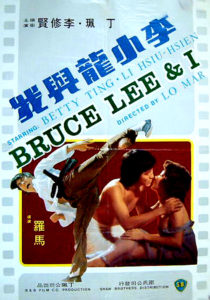 As you might expect from a film with this intention, it’s not really an action movie. There are a few fights with Bruce here and there, but most of the film is composed of dramatic scenes meant to attach us to the characters and pull out emotions. This is where the film really fails to deliver. We see that Bruce helped Betty when she was down and out, we see that this led to a lasting friendship, and we see that it eventually became a sexual relationship. The problem is that while we see these events, we don’t feel much about them. Both Betty’s and Bruce’s characters are too shallow to really care about, and Bruce is drawn in a fairly unlikable manner, which definitely doesn’t help.

Was he really like this portrayal? It’s definitely possible since the film is something of a tell-all movie, but here’s where I become even less interested. Bruce Lee and I, at its core, is a biopic, and I just plain ol’ don’t like biopics. I honestly don’t care about the private lives of actors. What matters to me in this case is that Bruce Lee died, and the circumstances, whatever they were, just don’t hold my attention. There are exceptions to this, of course, but I think this may explain some of my disinterest in the dramatic aspects of the film. I say “some,” because honestly Bruce Lee and I just isn’t very good. I will say that Bruce’s giant trampoline bed with 20-some multi-colored pillows did capture my attention, and I would love to think that this is how he actually manifested his superstar life of extravagance. Some people buy a fleet of fancy cars, but Bruce was more interested in pillows. 🙂

When there is action, it’s handled well by stalwart choreographers Tang Chia and Yuen Woo-Ping. Many of the scenes are intended to replicate Bruce filming parts of The Big Boss and Fist of Fury (without naming them), and while the circumstances are a little different than the actual films, they do a great job of approximating the films so they are recognizable. There’s even a guy playing Lo Wei (Wong San) directing the scenes, and Golden Harvest exec Raymond Chow shows up as Mr. Wong (Wang Sha). Later in the film, Bruce has a few battles within his real life, and the difference of the choreography is interesting.

The movie battles look a lot like what you’d commonly see in films from the early ’70s. Not necessarily Bruce’s movies, because he always brought a unique energy that has never been accurately replicated, but it’s very reminiscent of the Shaw movies of the time. The “real life” battles are choreographed much tighter, in the style of the fights seen in Chang Cheh’s Shaolin Cycle (what I consider to be the gold standard for the choreography of the era). The last fight of the film is particularly great, and it’s probably the best fight performance I’ve seen yet from Danny Lee.

Overall, I’d say that this is an easy pass for most Shaw fans, unless you’re super dedicated to Bruce Lee and you want to see everything related to his legacy. I enjoyed the looks behind the scenes of the Hong Kong film industry that the film provides, showing off the Shaw studio buildings, as well as purposefully shooting certain scenes to show the entirety of the production crew. The “Fist of Fury” dojo fight, in particular, contains a lot of these elements. But as I mentioned before, most of the film is just a bunch of ineffective dramatic scenes, so you really gotta slog through them to get to the interesting bits.

Next up in this chronological journey through the Shaw Brothers Martial Arts catalog is a non-martial arts drama that I’m curious about: Pao Hsueh-Li’s Heroes of the Underground! See ya then!