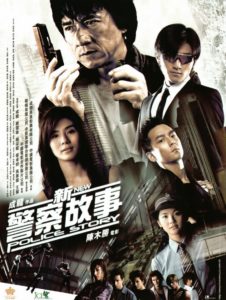 It has taken me many years, but I have really come to love Jackie’s dramatic films. I adore Crime Story and find it to be one of his most underrated films. I recently re-watched Heart of Dragon and it played even better than when I reviewed it a couple of years ago. New Police Story is a great addition to this line-up, and while film is a collaborative medium, I feel like the film’s success hinges almost entirely on Jackie’s performance. If we didn’t believe in his deep commitment to his men, many of the dramatic beats simply wouldn’t work. Director Benny Chan lays the groundwork well in the early parts of the film, but it’s during the assault on the robber’s warehouse hideout that he pulls everything together and puts the weight of the film onto Jackie’s acting skills. The criminals simultaneously do the same thing to Jackie’s character in a sadistic, crippling game of physical and emotional warfare. Jackie digs in and delivers a heartbreaking performance imbued with deep emotion and heart, and the rest of the film is built atop this emotional high.

Don’t be worried by all this talk of drama; there’s plenty of action contained in the film, as well. It’s perhaps at a lower ratio than a usual Jackie Chan film, but the quality is high, and in the case of the stunts, absolutely incredible. Jackie previously collaborated with Benny Chan on Who Am I? and I guess they decided that the incredible run down the side of the building in that film needed to be topped. How do they do this? By completely removing the slope and having Jackie descending the flat, vertical surface of a huge skyscraper, literally straight down. It’s absolutely nuts! And it’s not just Jackie, there’s a guy on a bike preceding him down the building, and Jackie is followed by Nicholas Tse, who’s going down upside-down. Whoa! I understand that the risk is less than it seems in the film, but no amount of rational thought can overcome the sheer immensity of the stunt and its danger. And that is merely one component of the action sequence!

The other standout is the runaway bus sequence where Jackie is stuck on the bus’s rooftop as it crashes through everything in its path (which is a TON of stuff). Many of these smashed-thru things happen to be made entirely or mostly out of glass, so it is both a thrilling sequence and an homage to the insane amount of glass broken in the original Police Story. Compared to these incredible stunt sequences, the fights are somewhat disappointing, which is to say that they’re great instead of absolutely amazing. This didn’t matter to me, but I could see others wanting more out of the fights. The fight between Andy On and Jackie in the Lego exhibit is the highlight, for sure, but all the fights have some excellent moments. The high-quality drama also heightens the action sequences, making them resonate powerfully in the context of the film. Jackie, Nicky Li and the JC Stunt Team truly delivered the goods in New Police Story!

The US release fares a lot better than most of his Hong Kong films, too, only receiving one cut to a flashback scene at the end of the film. The film works without the scene, but it perfectly caps off the film and its central relationship, and leaves the audience with something to ponder and re-examine the film with during subsequent viewings. Anyway, I highly recommend giving New Police Story a shot. It’s easily one of the best Jackie films of this era, and it gets even more impressive when you realize that he was 50 years old when the movie was made.

Next up in this chronological journey through the films of Jackie Chan is Stanley Tong’s The Myth! See ya then!