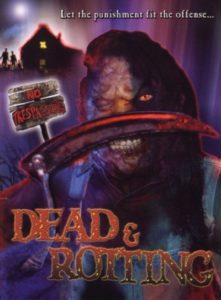 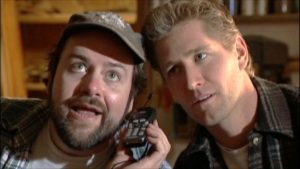 Dead & Rotting works with a limited set of characters, and it perfectly establishes them very quickly. Our three leads are each defined and unique and unlikable in the time-old traditions of horror movies that encourage you to root for the villain. This gives the witch motive and reason to delve into her magical knowledge to teach these guys a lesson, and it’s very fun to watch all this play out. I mean, even if the characters weren’t great, any script with the line “Witches are like gangbangers,” deserves some praise. The acting is universally great from the main cast, too, with Trent Haaga and Debbie Rochon shining the brightest.

This is an early 2000s low-budget movie from Full Moon, though, so Dead & Rotting is pretty light on the gore. It makes up for this with a few moments that really get under your skin, as well as some nice sound design and clever directorial instincts. Dead & Rotting is shot beautifully, with well-framed images that look far better than just about every other shot-on-video, low-budget horror film I’ve seen from the era. It’s genuinely funny, too. The DVD extras informed me that director David P. Barton was a childhood friend of J.R. Bookwalter, and the pair made many films together. Barton went on to a successful FX career, but unfortunately this is his only feature credit as a director.

I really enjoyed Dead & Rotting, and I would think that most people interested in low-budget films would too. I wish I had more to say, but whatever… just watch it!