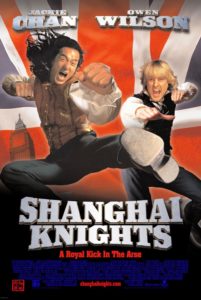 Things that come close to greatness are more disappointing to me, because the unrealized potential is so apparent and seemingly easily attainable. Something completely horrible is bad and comfortably overlooked, but something almost there can be maddening. This is the defining element of the action in Shanghai Knights; it’s well-choreographed and contains tons of great situations and ideas, but the music is completely inappropriate. The music itself is fine by itself, and it would work over the right kind of scene. Music is a key component to the rhythm of a fight scene, but the score of Shanghai Knights almost feels like it’s actively working against the flow of the action. I’m all for experimentation and artistic risk, but scoring fights with music more fitting for parading around a town square is just unacceptable.

As much as the music works against the action, the editing and camerawork betray the fights at times, too. A great Jackie Chan action scene has a natural flow and energy to it that’s unlike anything else in the movies. It’s what ignited my passion for Hong Kong movies over 20 years ago, and it continues to stoke the flames. This energy and rhythm comes in flashes in the action of Shanghai Knights, but I couldn’t make it through a single action scene without it being broken multiple times due to the editing, specifically because certain actions or shots weren’t naturally flowing into one another.

At the time, I attributed this to the direction by David Dobkin. After the movie was over, I decided to give the deleted scenes a run through, in spite of my better judgement. Why would I watch more of a movie I didn’t like? What I found in here — along with many scenes cut for time — were multiple action scenes in their original state, before they were edited into the movie. So yeah, the action scenes were finished, edited pieces that were then cut down into the disappointing versions in the movie. Watching these uncut versions of the fight scenes (thankfully without music, too!) was a revelation, because it showed that Jackie choreographed wonderfully flowing action scenes that are much closer to his Hong Kong style than anything he’d done in the US previously. It’s mind-boggling why they’d have Jackie spend so much time crafting true Jackie-style fights and then completely sabotage them. WTF!?!

If you’re a fan of the first film, I imagine you’ll like this one, too. I didn’t like either of them, so there must be people out there that are opposite to me, right? I do find it weird that they almost completely abandoned the western setting for this film, but since they already used just about every Western cliche, there probably weren’t enough for a sequel. So I guess it makes sense that they went to England and thoroughly exploited many of the stereotypes and American cliches about the British! I’m glad there isn’t a third movie; I don’t know if I could take it.

Next up in this chronological journey through the films of Jackie Chan is the Hong Kong film The Medallion! I’ve heard some bad things, but it can’t be as bad as the American films, can it? See ya then!