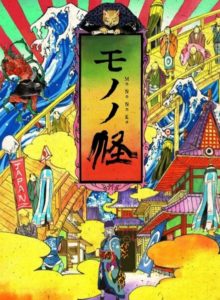 Now, the series does have quite a lot of CG, but it’s the kind that makes me wonder just where the CG ends, or if it ever does end. The CG uses a lot of filters and texturing to blend into the 2D images, and it works out a lot less obnoxiously than I would have expected.  At first the weird paper texturing was kinda distracting, but over time I got used to it, and now I feel like the series would have looked a lot worse without it. The animation kind of reminds me of Secret of Kells, but with a much, much different aesthetic. And it’s that aesthetic that really sells the series. Most of the time I was so lost in the imagery that I didn’t even pay attention to the fact that there was so much CG everywhere, and by the end of the series I had mostly forgotten about it. 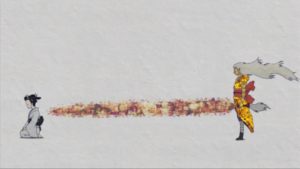 The series is unusually episodic for an anime. It’s only 12 episodes long, putting it around four and a half hours, and it covers five different stories, each of which takes two or three episodes to tell. They all feature the same main character, an unnamed medicine seller with elfin features that no one seems to think is strange. The hero travels around historical Japan, exorcising ghosts from various locations. Each story has some malicious spirit that must have its form, truth, and reason discovered. Only once the ghost’s tragic history is fully revealed can the medicine seller unsheathe his mystical sword and slay the foul thing in amazing Technicolor glory. And along the way, you can bet on a lot of strange monsters, incomprehensible images, and gruesome deaths to make the time go by.

It’s almost like a Sherlock Holmes series. Every ghost has some mystery surrounding it, and the bulk of the story is spent uncovering the facts of why the thing is so angry and vengeful. It always ends with the medicine seller confronting the ghost, usually with the other characters standing by to listen, and stating what actually happened before destroying the ghost in a mind-bending display of hallucinatory visuals. OK, Sherlock Holmes lacks the bizarre quasi-action scenes, but the stories definitely play out as much like murder mysteries as they do horror stories, teasing out every little fact until everything finally connects together at the end. 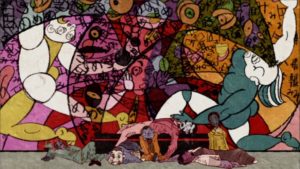 They also play out a bit like Japanese superhero stories. A flashy transformation scene shows the medicine seller turn into something even more alien with glowing face paint and super golden energy sword. The medicine seller himself is also highly reminiscent of Vampire Hunter D, or perhaps Batman, with his stoic and emotionless confidence. He always knows what to do, and nothing takes him off guard. It’s a strange experience to see things that are so familiar, if not outright cliched, done in such a unique and original way.

It’s also strange to see so many scenes that are clearly meant to be scary, but they just don’t work on me. I have some sort of deep-seated inability to suspend my disbelief about a story. I always have that knowledge that it’s just a story, that it’s all just a fantasy. This is why I usually ignore the horror genre. It’s a genre that relies too heavily on identifying with the characters’ fear in ways that I just can’t seem to do. So while I sat there looking at the creepy bits I was having fun. I had a big smile on my face while watching all the strange visuals on display and marveling at the creativity, even though I knew it was meant to be inducing fear. 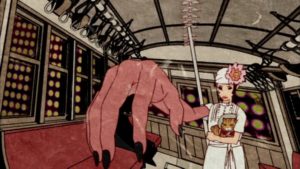 So I guess I don’t really know how well it will work for people who actually respond to horror movies the way they’re supposed to. But for me, it was an absolute blast. Everything was new and weird. For me, Mononoke is all about its unique visual style, and it delivered everything I was hoping for. I was going to say that I never expect to see anything quite like it again, but it turns out that there are some other related anime titles out there, so I actually have every expectation of seeing something similar again, and I’m looking forward to it.

It does have a few slower moments that felt sluggish to me, but even in those moments I was still intrigued to find out what was going to happen next. My only complaint about this series is that it’s 12 episodes long. I wish it was longer so I could see more of its beautiful insanity. And if that doesn’t count as a recommendation, I don’t know what does.