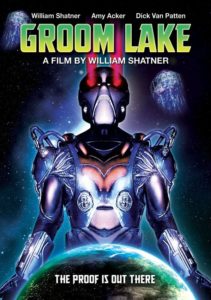 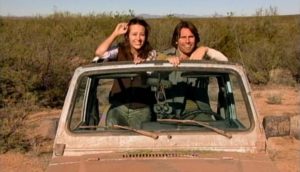 Dietz is an important character in Groom Lake — he’s probably in the movie more than anyone — but he is not the main character. That distinction would rest on the shoulders of Andy (Dan Gauthier) and Kate (Amy Acker), a couple in search of a special time together. Kate recently found out that an aggressive form of lupus leaves her with only six months to live, so the couple is trying to make the best of it. As someone in a similar, but more protracted situation with my MS-afflicted wife, I was intrigued by this story point quite a bit. The film doesn’t handle it especially well, but it did manage to resonate through the layers of boring filler and alien shenanigans.

Upon watching an interview with Shatner on the DVD, I was surprised to learn that this story line, and the idea of “A love that never dies,” was actually the genesis of the project. His wife had recently died, so he came up with this story as a way of coping. It makes total sense in retrospect, but the movie does not do justice to the point of the story line. The film’s resolution is profound, but it’s presented subtly, almost like an afterthought, so it would be easy to miss it. 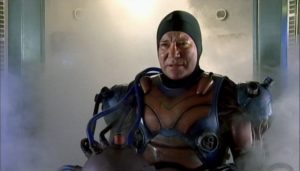 The interview also reveals how Shatner came to be involved with Full Moon. Apparently after the script was written, the search for money began, and while it wasn’t anywhere near the budget he had wanted, Shatner was able to strike a deal with Band for a small amount of money. The way Shatner talks of compromise and low-budget ingenuity, it’s clear he respects and understands the allure of a lower budget to spur creativity; I just wish that I could say that the overall film reflects his passion and commitment to the project.

Groom Lake inspires the most love when it’s at its most creative. The premise surrounding the aliens and their ship, as well as their design, is unique in a way that only visionary science fiction can be, expanding your concept of what is possible in this grand, unfathomable universe we live in. It could also be seen as somewhat campy, in a ’50s short story kind of way, so whether we agree on this point will depend on your tolerance for that sort of thing. The low budget also keeps these elements from being as flashy as they could have been, but I thought they were all realized rather well for what the filmmakers were working with. The film is also nicely shot by Shatner and seasoned cinematographer Mac Ahlberg, in spite of the inherent ugliness of video from the early 2000s.

Groom Lake is not really worth the time, but after learning how it came to be, I do like the film more than I did while watching it. Not enough to recommend it, even to Shatner fans, but enough for the film’s message to stick with me in my down moments as I care for my ailing wife.