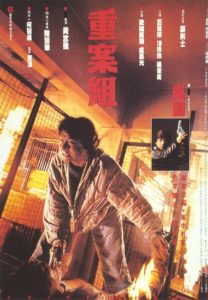 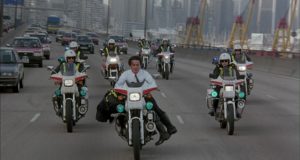 These kinds of things do happen in real life, though, and Crime Story is actually based on the events surrounding the kidnappings of Hong Kong businessman Teddy Wang. Many specific details carry over from reality into the film; they even filmed certain sequences (such as the kidnapping) at the actual crime scenes. This speaks to the film’s commitment to providing a more realistic take on police work, in addition to the general goal of entertaining an audience (somewhat similar to the recently reviewed 1973 Chang Cheh film, Police Force). Crime Story excels on both fronts, leaving you satisfied, yet also respectful of how intense and hard the job of a policeman must be.

Kirk Wong achieves the film’s mixture of realism and entertainment with an expert eye for framing and cinematography. Crime Story is a rich, colorful film; I wish all the modern directors making gritty, colorless films would take a look at this one! Crime Story looks and feels like it’s happening right here in our world, with no filter between the story and the audience. But the film is at its best when it’s taking place in multiple locations, with the crosscutting between them ratcheting up the tension with every cut. Crime Story then has the good fortune to be able to release said tension with action sequences choreographed by the always incredible Jackie Chan Stunt Team. 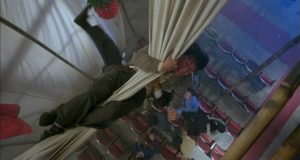 Crime Story was never intended as an average Jackie Chan film, and the action choreography truly reflects this. The Jackie Chan Stunt Team seemed to take this as a challenge, pouring all their collective energy and talent in making the non-fight action sequences excite in much the same clever and creative ways that Jackie’s hand-to-hand scenes usually play out. The car chase, like the rest of the film, is relentlessly intense, and the sheer novelty of watching multiple cars and the people inside them all performing tightly choreographed action as one, is truly impressive.

Jackie does get some opportunities to flex his hand-to-hand skills, but more often than not, these moments are also played down compared to the traditional Hong Kong fight scene. The difference is somewhat subtle and hard to explain, but I think it all hinges on the focus of both the camera and the choreography. In Crime Story it’s more about the overall scene, the danger, the backpedaling and the reacting that a police officer must do when facing life-or-death situations. So instead of just watching blows being traded, everything is reduced down to its dangerous essence. All fat is removed and we’re just left with the reactiveness necessary to survive in the moment. Jackie’s environmental fighting is usually based on these types of reactions, but the tone of realistic danger changes the focus away from each individual movement. 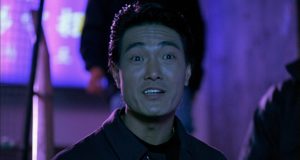 The stunts are also downplayed to some degree, reflecting and helping to create the film’s stark tone. Jackie gets his moments to shine, but some of the most impressive and incredible stunts are taken by the villains. One guy falls from the rafters of a two-story theater, his back slamming into a shelf partway down the wall and bouncing down onto a retail counter before finally hitting the ground. O.U.C.H. And this is merely one two-second moment among a plethora of similarly incredible stuff. As a fan, I hate that the days of these kinds of stunts are long gone in Hong Kong, but as a human it is completely understandable. If I were them, I’d want to use CG too!

It’s no secret that I loved Crime Story, but it does have a couple of minor issues. The idea is presented that the kidnapped man, Wong Yat-Fei, is an evil man with a reputation as an asshole, but little is done with this. Wong does seem to be a bad guy — there’s a great crane shot that perfectly illustrates his love of money over the compassion for others — but we never get the interesting dynamic that this hints at. Eddie may be protecting an alleged criminal from a corrupt cop who wants to kidnap him in the interest of fighting Wong’s “evil plans” and taking his “ill-gotten money in the name of justice,” but any substance you get out of this will be all your own. 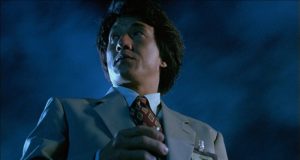 My other slight complaint — and this is going to sound strange — were that some of the “Jackie moments” felt out of place, and I think the film could’ve been even better and more potent without them. Little things like his cocky front flip after the fight in the office, or jumping through the tight bamboo square in the theater when he just as easily could’ve run around it, are quintessential Jackie Chan moves, but they don’t feel like Eddie Chan moves. I love them as isolated moments, but within the context of Crime Story they needlessly took me out of the film. Although, if you have Jackie Chan in your movie — especially at this time when he was at the height of his fitness and abilities — and you don’t utilize his special talents, that seems like a bad decision, too.

Crime Story is a fantastic film, though, and I want to stress how minor these issues felt against the strength of the film as a whole. It is a unique entry in Jackie’s filmography, and easily one of the best made films of his career. Jackie Chan turns in what is probably the best performance of his career (at least up to this point), and Kent Chang is fantastic as well. Kirk Wong is definitely a director I’ll have to dig into, especially his two follow-up films that are also based on true crime cases: Organized Crime and Triad Bureau and Rock N’ Roll Cop.

If you dig Hong Kong film, this is definitely one to check out. It’s just a couple of hairs away from being a four-star movie for me, and I have a feeling that I’ll only grow more fond of it over time.

Next up in this chronological journey through the films of Jackie Chan is Wong Jing’s City Hunter! Hadouken! See ya then!