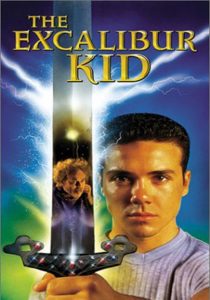 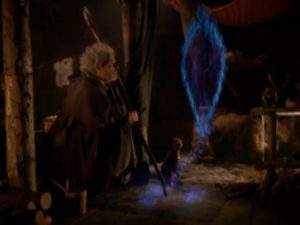 You might expect this trip roughly 1500 years back in time to be a magnificent event in Zack’s life, complete with some visual flair and fireworks to delight those watching his tale. But no! Zack merely walks around a tree and he’s there! As he continues walking he finds a medieval English square, complete with the sword in the stone of legend. None of this makes Zack even a bit apprehensive about his situation, but I can buy it because if that happened to me I know I wouldn’t immediately go into berserk mode because I thought I’d just time traveled by walking through the woods. The weird thing is that never once in the entire movie does Zack ever question his arrival in this time. He merely accepts it and becomes King of England after drawing the sword from the stone.

The other side of this sorceress conundrum is the sorcerer Merlin (François Klanfer), who had his eye on Arthur during this time and knows that if he doesn’t set things right, all history will be changed. This makes up the bulk of the film’s struggle, and Merlin is quickly able to enlist Zack in his cause. But remember, the standard of crazy that I’ve come to expect from the Moonbeam films isn’t anywhere to be found in The Excalibur Kid, so all this struggle amounts to is a lot of conversations. At the risk of sounding like a simple-minded infidel: Boring! Dialogue moving a story forward has its place, and its place is in a different movie! Where’s the dog-faced human surgical experiments? Where’s the automatons with doll faces? Where’s the flair? I guess Full Moon decided to get reverent when dealing with the King Arthur legend, but who wants that? 🙂 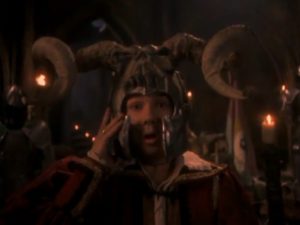 I’m sure part of this reverence has to do with the film’s budget, as corners seem to have been cut at every opportunity. The time period and the Arthurian legend are full of interesting things to fill a movie with, but, as I mentioned, The Excalibur Kid is mostly just conversations. In one of these, Zack mentions some upcoming jousts. My first instinct was to get excited at the prospect of seeing some shoddy, Full Moon joust scenes. But then a couple of scenes later, Zack says something about the jousts happening in the past! They just skipped right over it! The film is also played so strait-laced that there’s not really much opportunity for FX, further subverting the general Moonbeam style and diminishing the entertainment value.

The film’s only saving grace comes via a couple of sword fights, and they are easily the two best scenes in the film. The first comes when Zack and Arthur spar with each other (while talking, gotta get more talking in!), and the two genuinely form a bond. It’s legitimately a good scene, unfortunately surrounded by a hopelessly boring film. The other great moment comes near the end, while Merlin and Morgause are engaged in a rather tame wizard battle. Morgause tries to end it quickly by conjuring a pair of fireballs and sending them Merlin’s way, but lo, tender readers, what is that on yonder staircase? Why, it’s Arthur swinging on a rope like Tarzan in order to deflect the balls of fire away from Merlin. Hahahahahahaha, now this is the kind of crazy I wish the whole movie possessed!

The story may have been inspired by the ever-popular Arthurian legend, but The Excalibur Kid isn’t creatively inspired in any way. And to think this is aimed at kids! No kid would sit through this movie; I barely could and I like these weird little Moonbeam movies!

Next time I get around to a Full Moon movie I’ll be watching Danny Draven’s 2003 film Dark Walker! See ya then!