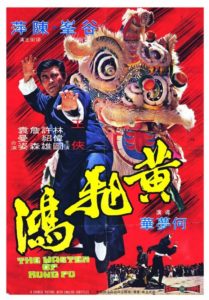 A foreign man, Mr. Gordon (Shi Lu-Kai), is in the import/export business and he needs someone to guard his valuable jade collection. In order to find a suitable chief of security, he sets up a martial arts tournament to decide who he’ll hire. Mai Gen wants to win the job and the prestige associated with it, so this is why he’s trying to place himself above Wong Fei-Hung. Meanwhile, a shady businessman named Deng Xi (Wong Hon), AKA the West Gate Fox, has brought in an outsider, Li Tian-Dao (Wang Hsieh), to win the job away from both of them. But Wong Fei-Hung doesn’t even want the job, so he merely gets caught in the middle as Mai and Li double cross and betray their way around each other.

The Master of Kung Fu portrays the traditional righteous and benevolent Wong Fei-Hung, while also making an effort to clearly showcase his skills as a teacher and a doctor. I can’t say that this particular version added anything to Wong’s mystique, but there’s nothing wrong in simply portraying the upstanding community member we know and love. Ku Feng is ably suited to bringing this character to life with his resolute gaze and formidable martial presence. It’s nice to see Ku Feng get this kind of part after years and years of supporting roles on both sides of the good/evil divide.

The choreography does set the film apart from its contemporaries, as there is much more of a focus on depicting real martial arts. Yuen Woo-Ping and Yuen Cheung-Yan handled the action with true skill, bringing this martial tale to life with vigor. As I’ve often noted in my reviews, at this time the Yuen brothers really seemed to favor breaking every bit of wood imaginable within their choreography, but here this is toned down to be almost non-existent. It simply wouldn’t fit in something going for a more realistic tone, but don’t worry, they do break a few things in spectacular fashion (and often in slow motion!).

Within the more realistic fights, we are treated to some excellent three-section staff work by Ku Feng in a couple of scenes, notably later in the film when he tangles with Wang Hsieh (who wields a staff). Don’t go in expecting Gordon Liu or anything, but in regards to the time period the fight is very fun and satisfying. Other highlights include a short section with Ku Feng and Wang Hsieh fighting while walking on the lips of big ceramic jugs of water, and there’s even a mention of Shaolin, too! I can’t remember if Shaolin has come up before in the previous Shaw films, but if nothing else, it is something of an indicator of where the studio would head in the next year (most notably with Chang Cheh’s Shaolin Cycle films).

The Master of Kung Fu is somewhat disappointing, though. The editing really could have been tightened up in certain spots. This is mostly apparent in the fights, where the flow is occasionally broken by the cuts, but similar issues arise during the dialogue scenes as well. It’s not that bad, but it definitely kept me from fully enjoying the film. Ni Kuang’s script is also not as tight as his best work, but when a man is credited for 18 scripts in just this one year, plus another film’s story, I have to cut him a little slack! It’s not bad by any means, just not as robust as I would have liked.

If you’re a Wong Fei-Hung fan, The Master of Kung Fu is definitely worth a look. I liked it a lot in spite of its issues.

The Master of Kung Fu is available on iTunes and other digital platforms. As far as I know, the film has never been widely available in the West before its digital release!

Next up in this chronological journey through the Shaw Brothers Martial Arts catalog is Ting Shan-Hsi’s Flight Man, starring Ivy Ling Po! See ya then!