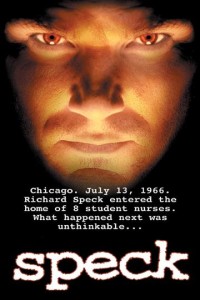 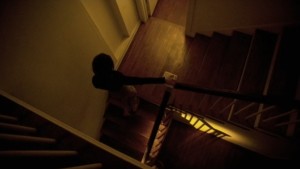 This probably makes Speck sound like some kind of standard home invasion horror film, but it’s really quite different than that. Visually, the arthouse strokes manifest as an intensely yellowed color scheme, literally pushed to the point of becoming a “Black & Yellow” film. About 98% of the film bears this color scheme, and while I’m not sure exactly why this is, I’m even more clueless about the significance of the scenes given a more traditional color palette. My first thought was that the yellowing was meant to evoke a faded photograph, or even a character remembering the event in the years following it, but the film doesn’t really support this. Since it was shot on video, perhaps the yellow was a low-budget trick to de-modernize the film’s look. Speck definitely doesn’t feel like it’s set in the ’60s, but the yellow distances it from its production year and creates a striking atmosphere for the film’s events. 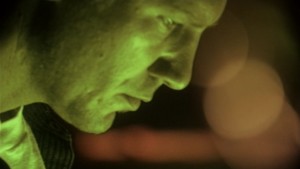 The other major arthouse stroke is seen in the narrative’s very abstract structure. Speck primarily plays out visually, with only a handful of anything you’d traditionally think of as a scene of dialogue. Like the yellow hue, the purpose of the abstract narrative remains somewhat of a mystery to me. As the film is from Speck’s perspective, perhaps it was to suggest a fractured mindset, to get “inside the killer’s head” so to speak. It seems plausible that this was the intention, but Speck is ultimately much too slow and hard to watch for this to be effective.

There’s something to be said for attempting to present a murderer’s story from his point of view, perhaps to gain insight into the perennial question of why someone would perform such atrocious crimes. But in order for this work, we have to want to get inside the character’s head. Speck made me hate Richard Speck as quickly as most films seek to endear a character to you. Richard Speck is deplorable, sadistic and absolutely ruthless, and at times, because of the film’s presentation, it almost feels like a glorification of his acts. I don’t think that was the intention, but I can easily see a like-minded individual watching this and having their hate-filled views reinforced and bolstered. Speck probably isn’t powerful or prevalent enough to spur deranged people to murder, but once again it makes me question why anyone would want to make this movie. 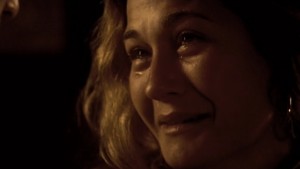 Like it or not, though, Speck does have an undeniable atmosphere, with the film’s score being the final component of this. The music is this kind of unending, slow pulse of a score that on one hand sort of lulls you into a sleepy state, and on the other hand fills you with nagging, unresolved dread. Like the other distinctive elements of Speck, the music is a bold artistic choice that kind of works against the film.

Regardless of this, these artistic choices should not be wholly discredited. I’d rather watch a horrid film that takes chances over a safe, bland one. When you consider how average and obvious a film with this kind of set-up could have been, you have to give director Keith Walley credit for crafting a unique film, even if you don’t like it (and I don’t know how you could like it). In the end, I’m still wondering why anyone would want to make this grimy, sadistic, hard-to-watch film, though.

Next time I get around to a Full Moon movie I’ll be looking at David DeCoteau’s Dr. Alien! See ya then!