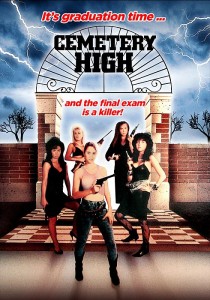 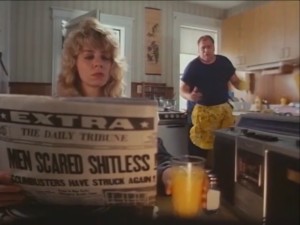 As it was released the film is quite boring, and I kept myself from drifting off into sleep by trying to figure out what parts of the film were from the original version, and which parts were from the tone-changing re-shoots. I’m going to guess that the “Gore Gong” and the “Hooter Honk” are part of the latter. Originally I thought these were a funny way of obscuring the fact that the film didn’t have the budget to show any gore, but when a gong sounds mid-way through a fairly dark scene in the middle of the film I became convinced that this was Band’s doing. I mean, if I had a dark comedy on my hands and I wanted to lighten the tone, random cuts to a gong and horns honking would definitely do that. Not well, mind you, but they would suffice in a low-budget, “we can use this stock footage” pinch. The only thing that makes me question this logic is that Bechard’s previous films are all goofy enough to support something like this, so perhaps it was his idea after all. Who knows? Not me, at any rate!

But B-Movie friends, the film’s tonal disparity by way of gong and horn is actually not the death knell it might sound like! No, what really seals the fate of Cemetery High as a Grade-A piece of shit is its absolutely horrific sound mix. The overall sound is very quiet so you have to raise the volume well beyond what would be normal. Even still, dialogue is muffled and mostly panned to the left channel only. There are also a few instances of the dialogue recording crackling from the mics being “too hot.” Sound effects and music are then often mixed much too loud in relation to the dialogue, so it becomes pretty harsh to listen to after a while. These are things I’d expect and give a pass to in a low-budget amateur debut, but not here. Ugh. The one saving grace of the film’s soundtrack is that leading up to the shootout at the film’s end, we are treated to this track from Roberto Pregadio’s score to the spaghetti western The Forgotten Pistolero. 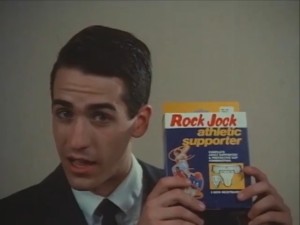 Is there a great movie buried under Band’s post-production tinkering? Hard to say, but I don’t think so. If the unadulterated Psychos in Love is any indication, then Cemetery High probably would’ve been better and more focused than it is now. Bechard’s IMDB note states that the abuse against the girls was added later, so if nothing else his version would’ve been a lot more fun to watch. As it stands we’re offered a comedy (that really isn’t funny) where multiple women are forcibly raped by mega-asshole douchebags, and I don’t know about you, but that sure doesn’t sound like most people’s idea of a good time, even if the film is clearly satirizing revenge movies and playing with established genre tropes. I’d be interested in seeing Bechard’s version, but I highly doubt anything like that will ever be released.

Next time I get around to a Full Moon movie I’ll be going back to the Moonbeam well with Little Ghost! See ya then!