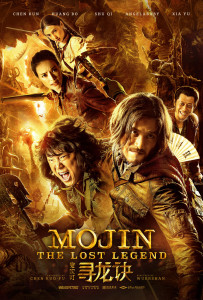 What sets Mojin: The Lost Legend apart from other tomb-raiding adventure films is the cultural aspect. I may be wrong, but it seems like most similar films feature a white male lead exploring and plundering some other culture’s artifacts. Here the leads are Chinese and the tombs they explore are also Chinese. This gives the film’s adventure scenes an inherently different feel. When Hu Baiyi employs his knowledge of the Bagua to help circumvent traps and pitfalls, I felt a respect for the tomb and its inhabitants from him. Other characters, some not of Chinese descent, don’t share this respect, rushing ahead and defiling the tomb without thought, but among the three Mojin the respect remains constant.

Technically, the film is very well-produced too. The underground sets are exquisite and full of wonderful detail. There are instances when CG must have been used to extend the sets, but I couldn’t discern where the real set ended and the digital extension began. I’m not an expert on modern Chinese cinema by any means (I prefer the older stuff), but for my money Mojin: The Lost Legend is one of the rare Chinese films to feature exceptional CG work. Regardless of the CG, the sets they actually built are wonderfully huge, and this went a long way to enthrall and delight my senses. We can’t all venture underground to steal from the dead, so I really appreciate being transported there by the filmmakers. The few instances of makeup FX are also fantastic, particularly the creatures during the finale of the film. I’m honestly not sure what they were, but they captured my imagination fully. 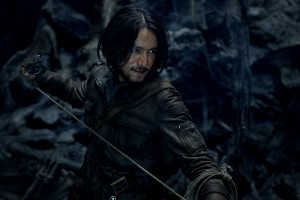 Going along with the big sets and the great FX work, Mojin: The Lost Legend is also shot with the IMAX format in mind. The bulk of the film is presented in a traditional widescreen ratio of 2.35:1, but certain scenes play in a larger format, filling the entire screen with fun, exciting visuals. I watched the film via an online screener, and I can only imagine how great it would look up on the big screen and the even-bigger IMAX screen! BUT, and this is a big but, it is my understanding that audiences outside of China won’t get a chance to see the film in IMAX, so I’m unsure if the dual aspect ratio will make the transition to the non-IMAX version. I’m sure it’ll still play great without it, and hopefully the eventual Blu-Ray/DVD release will replicate the ratio shift, like the home releases of Nolan’s Dark Knight films did. In any case, if you’re interested in Mojin and the film comes to your area, definitely make the effort to see it in the theater. It has the spectacle to make the trip a worthwhile one.

Adventure is the film’s primary genre, but I think it’s important to note that, like a lot of Chinese films, Mojin: The Lost Legend is actually much more multi-genre than Western viewers are probably accustomed to. In addition to the adventure, the film is quite funny, dramatic and romantic, and when the zombies come out there’s even some gore (something that rarely ever makes it outside of the horror genre in the US). There’s even a bit of action, too! For me, the action was something of a weak link, though, cut up to the point of being very hard to follow. The edits that switch focus between characters amidst the action are sometimes in very odd places, interrupting the natural flow of the scene. From what I could see through the weird editing, the choreography by Shim Jae Won & Yang Kil Yong seemed pretty good, too. They also worked in the same capacity on the John Woo-produced Taiwanese film Warriors of the Rainbow: Seediq Bale (which I still have yet to see). 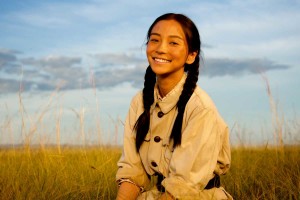 Mojin: The Lost Legend is based on an online novel called Ghost Blows Out the Light by Zhang Muye. It was so popular that it eventually went into print, similar to the success of 50 Shades of Grey over here. English info on the book is really scarce, but thanks to an interview with the director provided to me by Well Go, I learned that it’s actually a series of eight novels. No idea which one Mojin: The Lost Legend is based on, or if they even have individual titles, but judging from Wuershan’s comments, it seems like they took pieces from multiple novels and sort of crafted their own version of a tale in the world.

Why do I bother including this information? Well, because while doing this research to help me write my review, I uncovered that Mojin is actually the second film adaptation of Ghost Blows Out the Light. The other film, Chronicles of the Ghostly Tribe, released in China at the end of September 2015, and judging from its trailer it’s a full-on monster movie. Mojin is definitely not that, so this led me on a lengthy search for information that eventually yielded the fact that it was a series of books. So I include it to perhaps save some people the same trouble! Although now that I think of it, fans of this particular movie may prefer to do a little hunting and spelunking through clues to piece together to truth! In any case, I’m curious to see how Chronicles compares to Mojin in terms of characterization; I can’t imagine anyone else other than Huang Bo playing Wang Kaixuan!

Mojin: The Lost Legend delivers on the promise of a fun, grave-robbing adventure film, and it does so with charm, laughs, and a great moral. I had a great time with the film and I look forward to revisiting it!

Mojin: The Lost Legend arrives in select cities in the US and Canada on December 18, 2015 (the same day it releases in China!), with more dates to be determined. To find a theater near you, head over to the official Mojin movie website!