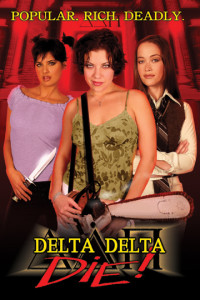 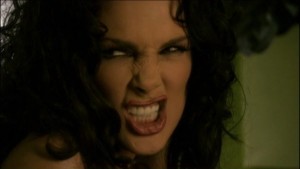 Oh, but it most certainly is so, and as it turns out all the girls of Delta Delta Pi are cannibals! They are led by Marilyn Fitch (Julie Strain), the house mother and the most voracious of them all. But whatever, they eat people… I’m liberal, I can go with it. 🙂 But selling the meat of their kills to the entire student base at their sorority bake sales? That is too far, you co-ed cannibals!

On a basic level, I like the premise of Delta Delta Die, but it feels like there’s untapped potential. I prefer my horror to have more substance than trash (not that you could tell from the films I review), so when we have multiple scenes of Julie Strain in a cupless bra torturing victims and dancing around bathed in their blood, I’m kind of checked out after the first 30 seconds or so. Although when she turns a giant meat grinder crank and says lines like, “Grind your balls and make my lunch!” it does have its own, trashy appeal. The reveal that the girls are cannibals happens really early too, so any kind of horror or tension there might have been is gone. But whatever, it’s clear that wasn’t the type of movie they were making. Maybe it’s not untapped potential here, but the movie just not lining up with my personal B-Movie preferences. 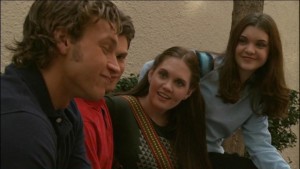 The film does have something of a mystery to it, though, and that’s how Madam Fitch and her sorority girls went from zero to institutionalized cannibalism. In order to explore this, the film flashes back to when Fitch and her best friend Rhonda were just starting the sorority. These are probably the best scenes in the film, as they are more substantial and less trashy. If the rest of the movie is junk food, then these scenes were slightly better quality junk food.

The climax is also worthy noting, as it brings Julie Strain and Brinke Stevens together in an epic wrestling throw down. Before it devolves to that point, they have a good argument scene, and while the B-Movie queens aren’t great actresses, they play off each other well and command your attention. But for some reason I feel like “the fans” are going to remember the intense wrestling match instead. They really go at it, too; they are troopers for their trashy art. It’s the perfect cap to this weird little movie, but if you’d prefer a film that ends with metered drama and fraught emotions, there’s probably a new Carey Mulligan movie you can watch for that.

Delta Delta Die is cut from a ragged cloth, but it’s one that you kind of like anyway, regardless of its flaws. Don’t watch it with Mom on Christmas, but B-movie fans, especially fans of Julie Strain, will likely enjoy the truly odd moments that present themselves throughout Delta Delta Die. Where else will you see Brinke Stevens deliver the Bunny Hop of Death? And Lord knows you have to get your fix of “body parts thrown into a blender and then tossed in the air in slo-mo” somewhere and it ain’t gonna be Star Wars: Episode VII! Hahahaha, if it wasn’t already apparent, this one’s for super B-Movie fans only, the trashier the better.

Next time I get around to a Full Moon movie I’ll be going back to high school with Gorman Bechard’s Cemetery High! See ya then!