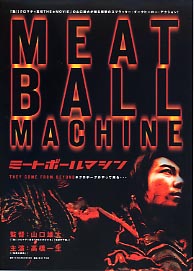 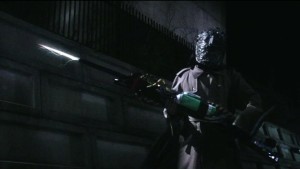 The story starts off with a pair of crazy cyborg-looking dudes beating each other up, with the victor about to eat the vanquished. He’s soon interrupted by some guy who stabs him in the back with some kind of electric spear thingamajig. All this is a nice opening, but it keeps going with more of the creatures taking over host bodies, and you begin to wonder if there even is a story, or if it’s just an endless chain of monster fights. This actually makes the film a rather slow starter as you have no one to root for and nothing to care about.

As the film goes on, however, it finally introduces us to the main character, Yoji, who is kind of a loner with secret longings for Sachiko, the girl across the street from his job. Of course he winds up getting into all sorts of trouble with his asshole coworkers and the monsters involving his dearly beloved, otherwise we wouldn’t have much of a movie here. There’s also a mad scientist on the loose with his creepy bandaged daughter in tow to spice things up and give a few explanations. So at last we have something to give the film focus and direction, and therefore a reason to keep watching. 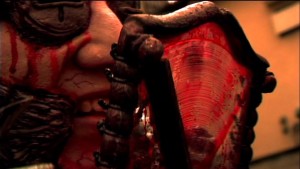 Of course the monster fights are a good reason to keep watching as well with all the blood and violence. The special effects work is something of a mixed bag. I wasn’t all that impressed with the cyborg monster costumes, though there are some small moments of eye-gouging, limb-rending gore when people get taken over that reminded me just a touch of early Peter Jackson stuff, though mostly the focus is on lots of blood rather than gore.

The real treat of the FX department is the puppets of the actual creatures that possess people inside their cocoons. They are full of oozy, gooey goodness as they spawn and attach themselves to their hosts’ insides. I don’t even know what the hell they were doing half the time, but they were always grimace inducing. 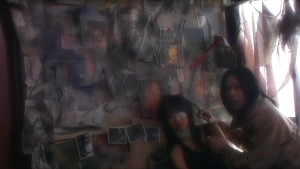 Perhaps the biggest flaw is the lack of variety. All the monsters look pretty much the same, so there’s not a lot of variety to keep things interesting. Fortunately, the film keeps a good grip on pacing. Each encounter with the monsters reveals more of their nature and how they operate. It has an excellent balance of questions and answers, and an ever-accelerating amount of cool, disgusting FX work as we see the monsters in progressively more and more of their creepy glory. So despite having more or less the same thing every time, we get enough new stuff to keep it from getting too dull.

The film as a whole is pretty well done with good pacing and lots of practical FX, and if you’re a fan of body horror, this is not a bad choice at all. I do wish it had a bit more monster variety and introduced the hero a lot sooner, but in the end it was certainly worth watching as the film’s strengths more than made up for its weaknesses.