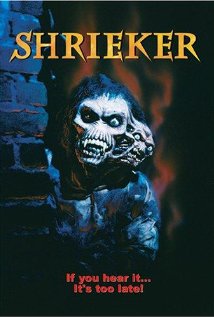 You’d think these kids would be too freaked out to stay in an abandoned hospital — and we, of course, know it’s a bad idea because the Shrieker lurks around in the dark corners — but the opposite is actually true. When our main character, Clark (Tanya Dempsey), hears a mysterious noise in the night, she grabs a flashlight and goes investigating without a second thought. And not just around the corner outside her door, she ventures down multiple shadowy hallways, ominous alleyways in between buildings outside, and even into the most creepy of all places: the dreaded hospital basement! Perhaps she was one of those people in the late ’90s that had “NO FEAR” stickers all over her car.

As a horror fan, you might make the logical jump that Clark’s fearlessness soon proved foolish, but no! In the depths of the hospital basement, she discovered another, previously unknown squatter! And how does this new acquaintance introduce himself? Well, first he has to turn on the lights she they can see each other, so he claps twice, a move known throughout the land to turn on room lights powered by The Clapper™! HAHAHAHAHAHAHA! See, this is why B-Movies are a worthwhile pursuit! For dumbass, incredible moments like this. This also gave me a great idea for something to do before starting a B-Movie, in order to make sure you’re in the right mindset. Clap twice and say, “Logic off!” Just make sure to clap twice and say, “Logic On!” after the movie is over or else who knows what you might do or accept as normal!

I’ve held off on watching Shrieker in my Full Moon review series because I thought the monster on the cover looked pretty damn cool, and I’ve been worried since starting this multi-year endeavor that if I didn’t hold back some of the more interesting films I’d be stuck slogging through a parade of awful films. While Shrieker definitely doesn’t live up to this kind of promise, waiting has paid off. A few months ago Full Moon released the film on Full Moon Streaming in its original 2.35:1 widescreen aspect ratio! Shrieker isn’t Lawrence of Arabia or anything, but it’s always nice to see films as they were intended. The wide image adds considerably to the composition in many instances, allowing us to take in the full view of a shadowed hallway instead of just a character walking down it. There’s also a number of shots where the characters shine flashlights into the lens, creating wonderful, circular lens flares that are perfectly framed. A film like this needs all the help it can get, and the widescreen image is a great bonus here.

Shrieker is essentially an old-school monster movie, with the villain hiding in the shadows and slowly taking out the annoying humans one by one. But the Shrieker goes about it a little bit different, opting to scare his victims and announce his presence by shrieking wildly as he approaches. It sounds kinda dumb, and perhaps it is, but it was also surprisingly creepy. Director David DeCoteau does a great job of obscuring the monster to create suspense, especially in the monster’s first couple of appearances. We hear the shrieks, we glimpse an eyeball as it passes behind a discarded desk, we see teeth gnashing in delight at the moment of the kill. The creature is also later viewed full-on, and it’s a great design well-executed as a full-body suit by FX artist Mark Williams. Perhaps not as detailed as the poster image, but great fun nonetheless.

Shrieker somewhat transcended its shittiness through a couple of good WTF moments and some fun creature FX work, but obviously your experience will vary. Unlike a lot of transcendent B-Movies, though, how bad Shrieker was never left my mind, and this is why I ultimately rated it as I did. But if you’re firmly entrenched in a loving relationship with low-budget cinema give it a whirl. You could do a lot worse!

Next time I get around to a Full Moon movie, I’ll be going with Linda Hassani’s 1994 film Dark Angel: The Ascent! See ya then!