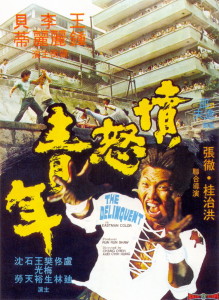 This might seen like the beginning to the plot, but this takes most of the movie to develop. The first half is a lot of bullying and sulking and John being courted by the triad. Perhaps if I saw this in 1973 it would’ve been a lot more fresh and interesting, but at this point it didn’t do too much for me. Halfway through I was already writing this one off as another of Chang Cheh’s mediocre attempts at a modern-set aimless teen film. But then it happened. All the story threads finally came together and Chang Cheh unleashed nearly 30 minutes of straight action.

Before I get to that lengthy finale, I want to note that there is a lot of action throughout the first hour of the film, too. John is assaulted in a junkyard by a group of low-level triad thugs, another group of punks tries to beat him up when he disrespects them on a basketball court, and then the triad sends a bunch of dudes on motorcycles to harass him on the beach. Despite this healthy amount of action, it’s not that great of action. The film was choreographed by good ol’ Lau Kar-Leung and Tang Chia, so I expect them to be pushing the outer limits of what 1973 was delivering action-wise, but nothing in this first half does anything of the sort. It’s all varied, entertaining and very competent, but it ain’t next-level by any means.

The last half hour of the film is transcendent, though. It makes up for any prior shortcomings of the film by delivering multiple scenes of bodily destruction and mayhem. Up until the third act, The Delinquent is on the edge of being brutal, but the finale cranks up the brutality to 11. Definitely not by today’s standards or anything, but it’s still really brutal stuff. Y’know, the kind of thing that Chang Cheh usually kicks out in his final acts! I guess I should’ve seen it coming, especially when John is wearing a white shirt that’s just screaming out to be stained with some classic Shaw Brothers’ blood.

In one of my recent Jackie Chan reviews I mentioned the simple power of seeing a stuntman hit the ground hard after taking a kick. It’s not something I’m used to seeing in the Shaw films of this era, but The Delinquent has a few instances of this. There’s also a really daring stunt where Wong Chung is tied to a huge tree trunk in the process of being sawed in half by a giant industrial blade. It looked incredibly real, and given Hong Kong’s lax filming insurance laws I imagine it probably was. Coupled with the gondola stunts I recently witnessed in A Man Called Tiger last week, I have to wonder if 1973 was a foundational year for Hong Kong stunts. It’s entirely possible that I missed little moments in earlier Shaw films, but from what I’m seeing it feels like 1973 saw a big step up in the danger level associated with HK stunts. Or I just coincidentally watched a couple of films that had cool stunts in them. I’ll have to remember to keep an eye peeled for this kind of thing as I delve deeper into 1973.

I’m not sure of how the directing duties were split between Chang Cheh and Kuei Chih-Hung on The Delinquent, but there are components of the film that feel very Chang Cheh influenced, and others that feel Kuei Chih-Hung influenced. For instance, the final 30 minutes is VERY Chang Cheh, while a good portion of the grimy location shooting around Hong Kong feels much closer to something like Kuei Chih-Hung’s The Killer Snakes than anything I’ve seen from Chang. There’s also a lot of extreme fish-eye lens shots which remind me a lot of similar stuff in Bewitched and other horror films from Kuei, and I know he also made at least one full-on motorcycle picture. Anyway, the styles don’t necessarily mesh together much, except for during the finale which sees the fish-eye lens used to sell an exceptional emotional moment of the film — arguably THE emotional moment of the film — so I’d like to imagine that while sections of the film were filmed independently by each director, they did work together on certain scenes like this one.

Despite struggling through the first hour of the film, I ended up liking The Delinquent quite a bit. I should say that a lot of the emotional pull and pay off in the final act comes on the back of the slow setup that the film takes you through, so even though it’s too long it ultimately doesn’t feel as wasted as it could have. Anyway, stalwart Hong Kong action fans will most likely enjoy The Delinquent — at least in part — all others can safely skip this one.

Next up in this chronological journey through the Shaw Brothers Martial Arts catalog is another Golden Harvest movie for context: Lo Wei’s Back Alley Princess! This one ranked eighth on the 1973 Hong Kong Box Office, so let’s hope it ranks highly for me in 2015! See ya then!