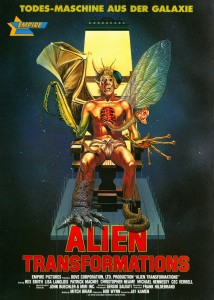 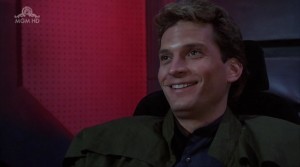 Of course, this woman is not a StripperGram, she’s actually an oozing alien creature! As they copulate, her true self starts to show through the glamour: boils and open wounds appear on her back, and her face slowly transforms into the stuff of nightmares. Wolf wakes up alone to find his ship on a crash course for a maximum security prison mining planet. Sounds pretty great, right? (And surprisingly similar to Alien 3, four years before that film!)

Unfortunately, the whole prison planet thing doesn’t really get explored much. Transformations is a low-budget affair, so while we get a look at a few hallways and some prisoners, there is a definite lack of scale. The film tries to make up for this by involving Wolf with the smitten prison nurse Miranda (Lisa Langlois), who was born on the planet and is looking for someone to educate her in the ways of the world. The love angle doesn’t work well at all, but it does lead to some fantastic moments of B-Movie hilarity. For instance, if my hand ever sprouts oozing boils, I hope there’s someone there to wrap it in gauze so the vanilla pudding-like ooze doesn’t get all over everything, and I hope they’re also kind enough to repeat, “Hold my hand! Hold my hand!” like a mantra while I try to ride out the pain I presume I’d be in. 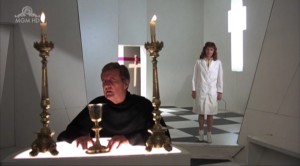 Transformations has one other major element in its blender: religion. There’s a monk stationed on the prison planet — as a chaplain, I’m guessing — and in one extra special scene he relates to Wolf his experience with a similar entity. When I called the monster of the film an “alien demon STD” earlier, it was this scene that gave it the demonic aspect. Apparently, this thing is some kind of invincible manifestation of pure evil that feeds and reproduces on sexual desire, which only purity can conquer. Excuse me for a moment. HAHAHAHAHAHAHAHAHAHAHAHAHA. I feel better, how ’bout you?

So, yeah, if you couldn’t already tell: this movie is awful, but it’s a total blast. It’s not just about the fun, either; Transformations is actually quite informative. I now know definitively that even space monks wear Birkenstocks™. I also learned that if I want another man’s woman, I must merely look ultra-confident as I stride over, look her in the eyes and take her by the hand out of the bar and into my bed. But it’s not just useless trivia and advice on “the game,” I also learned something about filmmaking. You really don’t have to worry about character building throughout your movie, you can just include a “fantastic” crying-to-Mozart scene an hour into your 76-minute movie that will do all the work for you!

Don’t bother with Transformations unless you’re a died-in-the-wool B-Movie fan… or you’re looking to transform into one!

Next time I get around to a Full Moon movie, I’ll be going with 2002’s Deathbed from director Danny Draven! See ya then!