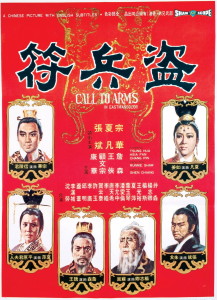 Call to Arms concerns the tyrannical Emperor Chin and his attack on the state of Chao. Residents of the nearby state of Wei fear that they will be next, and it is their efforts to waylay this fate that fill Call to Arms. Their first effort in this direction comes from Zhu Hai (Cheung Ban), the Da Liang City hero. He’s confident that he can end the struggle quickly, and before the film is even five minutes in, he’s plunged his knives into the emperor. Problem solved! Oh, wait… Here comes a bunch of servants to spin the bed around, revealing another bed behind it where the real emperor lays triumphantly!

From this opening, and the 20 minutes that follow, you wouldn’t be wrong to assume that Call to Arms is Zhu Hai’s film. But as the story plays out, it becomes apparent that he is only a minor player. He comes and goes throughout — he’s basically present in the big moments — but he’s not the star, nor is he the hero. There are many other characters, but none of them take up this heroic mantle, leaving the film with a bit of a hole. There’s a ton going on, but there really isn’t a character to care about. With all the backstabbing drama, I expected to be more drawn in, but to borrow from my analogy before: this is closer to reading a history textbook than it is a traditional narrative film.

For most movies we’d merely have to take this at face value, but with Call to Arms there’s actually something of an explanation. On the film’s HKMDB page, there is a note which states that Southern Screen #145, dated March 1970, reported that Call to Arms was finished in 1970 starring Chang Yi as Zhu Hai, but that the Shaw Brothers refused to release it because Chang Yi had defected to Golden Harvest (apparently Duel for Gold was also re-shot in parts because of Chang Yi). If I didn’t know, it’d be nearly impossible to tell that some of this was shot years earlier — it all seems to match perfectly — but the story definitely suffers from this. Perhaps it was always intended to be a hero-less tale, but these re-shoots are definitely a convincing and plausible reason why Call to Arms doesn’t focus on Zhu Hai as much as it feels like it should.

Since Cheung Ban is present in most of the fights, it would seem that a majority of the action would’ve all been re-shot sometime in 1972. The fights also feel quick and dynamic, and more “1972” than “1970” in terms of choreography. Someone named Yuen Woo-Ping and his brother Yuen Cheung-Yan are credited for the fights, too, and since Yuen Woo-Ping didn’t start working at Shaw until 1972 I guess that seals up that small mystery (that wasn’t much of a mystery). In any case, the fights are quite enjoyable, and if you’re a fan of Shaw-style bloodletting Call to Arms is very generous in that department.

My overall feelings about Call to Arms are a bit mixed, though. If you’re ready to devote a lot of brain power to keeping a whole mess of characters and political in-fighting straight in your head, then by all means jump into Call of Arms. All the politics reminded me a bit of a Shaw Brothers version of Game of Thrones, except instead of 50 expansive hours of TV, it’s all crammed into 78 dense-as-fuck minutes. Regardless, if you’re a fan of Yuen clan choreography, you might want to chance the mental fog for a few early fights from them.

Next up in this chronological journey through the Shaw Brothers Martial Arts catalog is another entry into my slickly named “Non-Shaw Films in the Top 10 HK Box-Office added for Context” mini-series within a series, Lo Wei’s A Man Called Tiger! See ya then! (Hopefully sooner rather than later.)