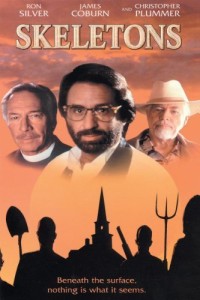 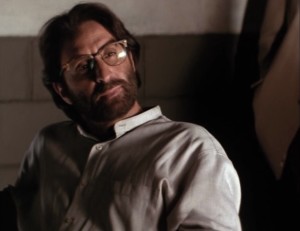 After a few quiet days in town, a man is murdered and the mother of the man accused of the crime pays a visit to Peter. She apparently knows his work and respects his commitment to sniffing out the truth. He does his best “…but I’m on vacation” routine, but the fire within him for investigative journalism won’t quit, and just like that the game is afoot!

Peter quickly finds out that all is not as it seems in Saugatuck, as the victim and the accused were actually in a homosexual relationship. Coupled with the religious small-town setting, I’m sure you can kind of see where the movie is headed, but even though this is the kind of thing we’ve seen before, DeCoteau does a good job of keeping the flow moving and entertaining. The film actually escalates a lot quicker than I expected it to, most likely because the filmmakers were aware of the logical jump that its viewers would make. 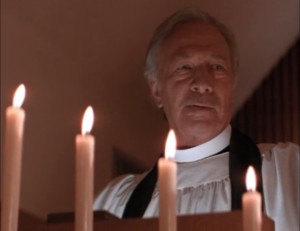 Skeletons was apparently made for HBO, and according to IMDB Ken Russell was initially on-board to direct the film before disagreeing with the producers about something. The producers are also responsible for my review here, as Full Moon’s Charles Band is credited as an Executive Producer on IMDB (although I didn’t see his name on the film). The name I did see listed as a producer that surprised me was Jordan Belfort. Yes, the same Jordan Belfort that was the subject of the Scorsese film The Wolf of Wall Street. Looks like he got into film production for a little while, and this was one of his films! Weird.

DeCoteau shot Skeletons in a widescreen 2.35.:1 ratio, but unfortunately the Netflix stream (and apparently the DVD release) was 4:3. Boooooooo! Due to this, tons of edits were inserted, cutting a long take into many short close-ups of people, ruining the flow and timing of the acting. It’s a small distraction, and one that most people wouldn’t notice, but since the advent of DVD and the prevalence of proper aspect ratio I’ve become horribly spoiled. I enjoyed the film quite a lot, but I feel like it would’ve been even better in its proper format (which is arguably something you could say about any pan-and-scan film). 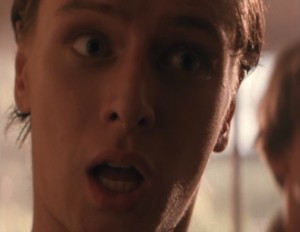 Part of what specifically makes these added edits frustrating in Skeletons is that there are some great actors in this! And they deliver some really nice performances! But because of the aspect ratio, the performances are all chopped up. You can’t see actors reacting to anything; it only cuts to them as they speak, so much of the nuance of the film and its performances is gone. Oh well, I should probably move on from this aspect ratio thing, but it really bothers me. Anyway, you can’t go wrong with Christopher Plummer or James Coburn, and Ron Silver is a great lead. Look out for Death Race 2000 director Paul Bartel as the town mayor, too!

While this is a “normal” movie for David DeCoteau, it’s not without its share of weird shit that probably wouldn’t have made it past another director. The most obvious instance of this is when a pair of musclebound, shirtless men in hard hats, wielding an axe and a chainsaw, attack a woman and her son in their car. The film also twists itself into horror mode really late, giving viewers some shocking sights usually reserved for more supernatural tales. For me, these added immensely to my enjoyment, but I imagine that everyone’s mileage will vary depending on your tolerance or enjoyment of such things.

You also get a fantastic B-Movie line towards the end. Christopher Plummer may have never delivered a better line in his career.

Next time I get around to a Full Moon movie, I’ll be going with the 1988 Jay Kamen film, Transformations! See ya then!