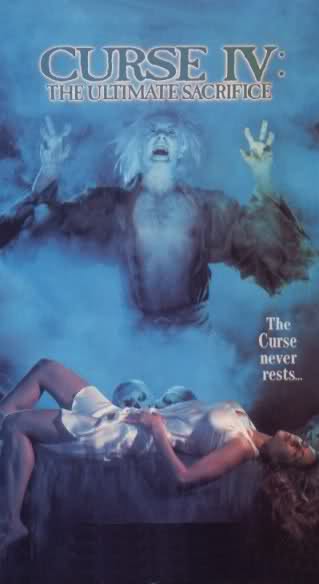 At long last I have arrived at the end of my cursed journey through the unrelated Curse films, and unfortunately for me Curse IV: The Ultimate Sacrifice is the worst of the bunch. The film began life as Catacombs, a 1988 Empire International film that got shelved when the company went under. For reasons I’m not privy to, Catacombs was shelved for five years after it was completed, even though Empire head Charles Band had created Full Moon and become well-established in the meantime. And when it was eventually released it came out as Curse IV: The Ultimate Sacrifice. I suppose that any connection, even one as tenuous as this, to an ’80s horror film that some people like must have made it more “rentable” back in the day. 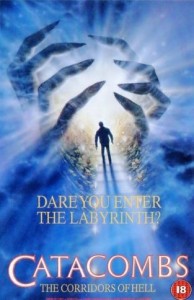 I’ll attempt a synopsis, but Curse IV: The Ultimate Sacrifice had me so bored that I regularly zoned out. The boredom made it nearly impossible for me to care about or keep track of the characters, and frankly I’m unsure if there even was a plot. The film did open with promise: in 1506, a demonic man is imprisoned inside the basement walls of an Italian abbey, a giant golden seal set into the wall to hold him in. It’s a very atmospheric and engaging opening, and since the dialogue is all in Italian without subtitles, as long as you can’t speak the language you can imagine that this pasty-faced dude is saying something about a curse and an ultimate sacrifice so the film’s new title makes some kind of sense.

We then jump to the present day, where a woman travels to the Abbey at the bequest of the Brother Superior (Ian Ambercrombie). He wants her there for some reason, but don’t ask me. Anyway, it doesn’t matter. That demonic dude in the basement wants out, and get this — he gets out! But for most of the movie he just inhabits other bodies, so it saved a lot on special effects. Black contacts are much cheaper than full-face makeup and wigs! At first I was frustrated that he didn’t come back because I actually enjoyed his demonic schtick in the film’s opening, but then he possessed the lifelike crucified Christ statue, pulled the nail from his feet and stabbed a monk who was trying to sneak a Snickers bar. OK, I guess this possession thing can work.

Well, it could have worked, but instead of continuing to embrace this kind of sacrilegious B-Movie insanity, they went with “respectable.” No more vengeful resurrected Jesus for you! The white-haired dude from the intro does come back for the finale — now with a boil-ridden face! — but don’t get too excited. The finale is just another excuse to bore you with meaningless bullshit dialogue. I’ve run out of things to say about this movie. The last note I took was “SHIT!,” as in “This movie is complete shit.”

My favorite part of the film was the priest on his deathbed who had lots of unintentionally funny things to say. I’ll leave you with a couple of sound bites to listen to as you bask in the joy of knowing that you’ve avoided this movie and I did not.

No trailer, but here’s the best part of the movie!

Next time I get around to a Full Moon movie, I’ll be going back to the Moonbeam well for David DeCoteau’s Alien Arsenal, which is supposedly a loose remake of one of my favorite films: Laserblast! See ya then!