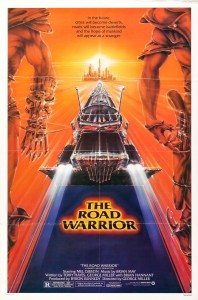 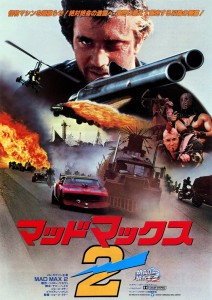 So when Max is told of a small outpost boasting an oil refinery and a tanker full of gas, he goes to check it out. Sure enough these people are out there in the middle of nowhere with their gas, but they’re trapped there by Humungus and his cronies (including Wez, the most badass henchman ever, played by Vernon Wells AKA Bennett in Commando)! Max isn’t really interested in helping the settlers, he’s done his time as a warrior for social justice, but it’s a movie so he eventually softens.

Where Mad Max centered around the burgeoning struggle between those holding onto the old society and those trying their best to tear it down, The Road Warrior is about those that wish to rebuild a society like the old one (the settlers), and those that have built up an entirely new society that’s more suited to the current times (the bandits). Both of these factions are still nomadic in nature, but by holding on to old ways the settlers are always at a disadvantage in the wasteland. The bandits have become so powerful that the wasteland is no threat to them; it is their playground. The bandits are nomads because they can afford to move, while the settlers move out of fear.

Max exists as the dividing line to this struggle, just as he did in Mad Max. He doesn’t wish to be a part of the settlers any more than he wants to be a bandit. Both sides are doomed, but as the settlers are the only faction with hope and Max is ultimately a good man at heart, he decides to help them. It probably doesn’t hurt that Max befriends the Feral Kid who hangs out with the settlers, as he probably reminds Max in some way of his own son lost long ago. 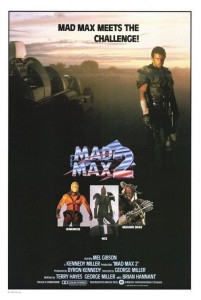 The Feral Kid is something of a faction all his own, too. He’s grown up in the wasteland and knows nothing else. He doesn’t hold onto an old idea of the world, or hope for something better, or seek to destroy. He simply exists and survives, fearing nothing. He’s quite similar to Max in this way, although where Max was beaten down into this state of survival, the Feral Kid is just naturally like this. In Max he has found someone who he understands and can look up to. So when the final voiceover reveals that the Feral Kid lived out his life as a leader among the settlers — thanks to the good actions of Max — we can leave the film with some hope for this crumbling world before us.

Oh, and the action is fucking stupendous! What really sets these Mad Max films apart from other action films is Miller’s confidence in allowing long stretches to pass without any kind of dialogue. The original films, especially The Road Warrior, are incredibly kinetic and visually detailed. The stories are definitely lacking in a traditional sense, but the previous paragraphs of this very review are testament to the fact that there is no lack of depth in the filmmaking. That so much can be said of a film with a basic well-used storyline, limited dialogue and a healthy dose of action, shows how impressive of a filmmaker Miller truly is.

The Road Warrior is a visual tour de force that expands upon its predecessor without ever trying to copy it. In that way, it’s a perfect sequel and a great film in its own right. If you haven’t seen The Road Warrior, you’re missing out!