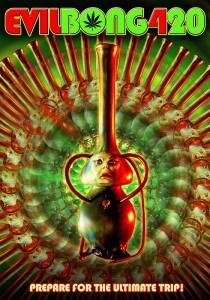 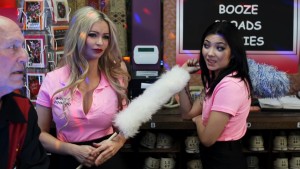 Like the last sequel, Gingerdead Man vs. Evil Bong, there’s a ton of Full Moon and Evil Bong merch on display throughout the film. Instead of getting mad at how shameless Full Moon is, add to your enjoyment by playing the “How much merch can you spot and identify?” game! This time it’s not just limited to Full Moon stuff, too; there’s a whole scene built around Smoke Central’s Mega Tornado Sprinkler. I just linked to it, so I guess their marketing ploy worked. Anyway, other than the obvious in-movie marketing for their souvenirs, I’m also getting the feeling that this merch is something of a running joke around the Full Moon warehouse. Is it possible that no one is buying said merchandise years after its production? Is it continuing to show up in the films because they just can’t get rid of it? Rabbit has a quick joke about this very thing, so I’m willing to bet that’s at least part of the situation. 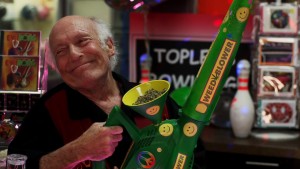 Which brings me to the return of “The Gook,” a character who made his screen debut in Gingerdead Man vs. Evil Bong. The Gook is one of the most fucked up and insensitive characters I’ve seen in modern films; he’s like WWII propaganda come to life. I really wish Full Moon would get away from this character (and Hambo), but I guess he’ll be showing up again and again as long as they have those dolls of him to sell. Evil Bong 420 also introduces another Badass Doll come to life: Joe Cracker. He’s on the lanes with his redneck buddy, and they are some incorrigible bastards. Their racism is played for laughs, which is uncomfortable, but their inclusion shows that Full Moon is more of an equal opportunity offender and I like that. As long as everyone is getting roasted, and I don’t get the feeling that anything is mean-spirited, I can have fun with it. 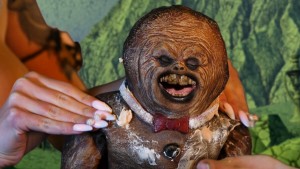 And more often than not, that’s how Evil Bong 420 is. I wish they didn’t resort to hack jokes and stereotypes, but I can’t deny that the movie is fun to watch. I’m not sure what a “normal” audience member would think of Evil Bong 420, but Full Moon fans will definitely smoke this bowl and be back for the inevitable sequel. Why tie up loose ends in a 90-minute movie, when you can stretch out that material and make another sequel? At this rate, I wouldn’t be surprised if they kept cranking out Evil Bong movies for years. Is that a good thing? That’s something to decide for yourself. If they’re all as streamlined and entertaining as Evil Bong 420, I know I wouldn’t mind.

While you’re meditating on your personal answer to this question, consider this line from Rabbit as a mantra to guide you to the answer you seek: “Try isn’t enough, you have to kick ass tonight!” More inspirational words have never been spoken, and if I’m not mistaken, wasn’t that one of the rejected lines for Yoda from the Empire Strikes Back script? 🙂

Next time I get around to a Full Moon movie, I’ll be checking out another non-Full Moon movie that’s kinda related (trust me, it’s all leading somewhere): the 1991 film Curse III: Blood Sacrifice starring Christopher Lee! I know I said this at the bottom of the Curse II review, but this time I mean it! See ya then!