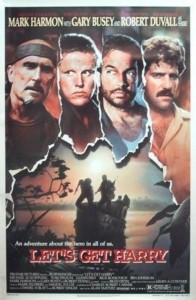 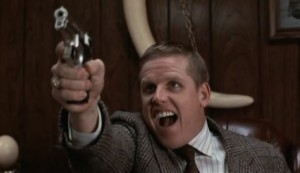 Initially, Let’s Get Harry was to be a very different film. When it was only a one-page treatment, the movie was offered to Sam Fuller to write and direct. He wrote a script, and at that time the movie was about a team of ex-GIs who rescue their buddy in Japan. Fuller was all set to go, but then another producer came to him with the White Dog project. The idea intrigued Fuller much more, so he agreed to make White Dog and push back Let’s Get Harry. The studio refused to push the film back, so Fuller told them to find another director. That’s how Stuart Rosenberg came to direct Let’s Get Harry, but since the talks with Fuller were in the early ’80s and the film wasn’t made until the mid-80’s, I wonder why they couldn’t have just waited for Fuller.

By the time Rosenberg was at the helm, the picture had been completely re-written from what Fuller had done, resulting in the Colombian drug lord and the team of unskilled commando plumbers. As much as my B-Movie-lovin’ brain enjoys that ’80s-as-shit premise, I’m glad to know for certain that it wasn’t Fuller’s idea. I don’t know that I’d still have as much respect for him as a soldier-turned-director if I knew he once threw caution to the wind and wrote about plumbers taking up arms. 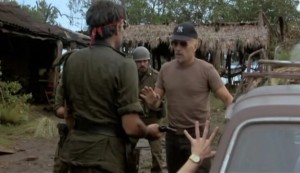 The problems that led to the finished film actually don’t stop there, with Mark Harmon’s success on the TV show St. Elsewhere making the producers ask Rosenberg to go back and shoot more scenes with him. Apparently the film originally only showed the enigmatic Harry in the final rescue sequence, and I suppose the producers must have felt bad about putting Harmon on the poster with just this highly limited role. (But that certainly hasn’t stopped others, especially those responsible for the wave of Jackie Chan VHS releases in the ’90s!) In any case, Rosenberg refused to do the re-shoots, so when the producers went ahead and shot them anyway, and then completely re-edited his movie, he took his name off the film and it became one of those wonderful Alan Smithee films.

This kind of behind-the-scenes trouble usually spells disaster for the viewer, but I actually enjoyed Let’s Get Harry quite a bit. Admittedly, a lot of that is my general affinity for ’80s action films, but it’s also because there’s a lot of genuine entertainment to be had here. Robert Duvall is especially enjoyable as the mentoring soldier running the show, as is Gary Busey as Gary Busey — I mean Jack Abernathy, Chevrolet dealer extraordinaire. The action is largely just your standard “Uzi fire in a general direction followed a Colombian dude shaking his body as a bunch of squibs blow” ’80s action stuff, but due to the film’s more serious tone it all kind of plays out like the “dark side” of ’80s action. 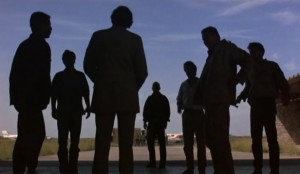 What I mean is that Let’s Get Harry still requires the ridiculous suspension of disbelief that any over-the-top ’80s movie would, but it never feels like the same kind of fun, joyous action romp. It’s meant to be taken seriously, and as long as you can believe that a team of pissed-off plumbers could enter a hostile foreign country and rescue their buddy, it works. But I’ll admit that this kind of split between tones is generally going to rub people the wrong way, and that’s probably why this one is so swept under the rug in spite of its fairly well-known cast (especially in 1986).

And there’s a guy with an eye patch wearing a t-shirt of Mickey Mouse wearing an eye patch. You can’t be too hard on a film willing to include that!