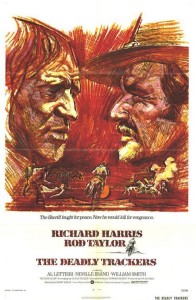 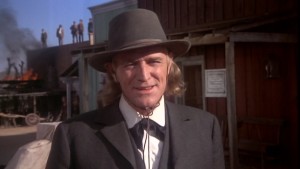 This film began its life as a Sam Fuller novel called Riata. Fuller then put a lot of work into a screenplay version of the story, and after completing Dead Pigeon on Beethoven Street he was lined up to shoot Riata in Spain. Shooting began, but just a short way in, Warner Brothers shut the movie down after seeing the dismal rushes featuring a French actress who couldn’t act (and who was forced onto Fuller by the shady producer). The rights to the film were sold off, the film was entirely re-written and re-cast (with the exception of Richard Harris), and The Deadly Trackers is the finished result.

From Fuller’s memoir, A Third Face, it’s clear that the basic storyline is largely the same between the two versions of the film. After the bank robbery, the bandit kills Kilpatrick’s son and Kilpatrick (Richard Harris) gives chase through the dangerous hills of Mexico. Fuller’s description of his version sounds like a thrilling revenge-western laced with the kinds of hard moral choices to be found in many of his other films. The Deadly Trackers, on the other hand, is merely a few sparse, fairly entertaining gunfights strung together with a ton of slow-moving, unaffecting dialogue scenes.

Other than the intense slowness of the film, the major issue is that Kilpatrick begins the film as a pacifist sheriff who refuses to shoot anyone out of respect for life. But almost immediately after the opening, Kilpatrick becomes a monster consumed with the thirst for vengeful bloodletting. There’s no arc to his character at all. He’s supposed to be betraying his personal beliefs, but he doesn’t seem all that broken up about it. He’s only likeable and interesting for about the first 20 minutes, because after that he’s indistinguishable from any other revenge-seeking character in any other revenge movie. So the point of him starting the film as a pacifist is what exactly? 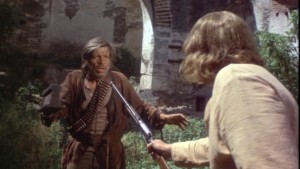 There are moments where you can see the filmmakers attempting to make a moment meaningful, but Shear’s direction is so poor that it feels like cinematic Mad Libs, with the audience expected to guess at the emotion that was meant to be there. Obviously, the audience’s intelligence should be an active participant in any good film, but these moments should also be enhanced with editing or some other cinematic technique, not simply left to die on the screen as they are here.

At 105 minutes, The Deadly Trackers feels about three times as long. I don’t really recommend it under any circumstances, although it does have its moments here and there. My favorites were the bandit character Choo Choo, who has a big chunk of railroad track for a hand, and when Kilpatrick went blind for a bit and saw in Predator vision. 🙂