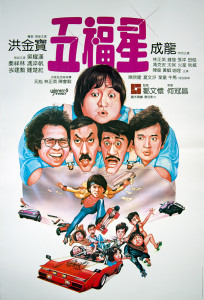 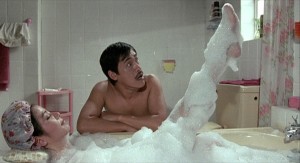 And it’s not just fun, it’s funny. Like, hilarious. There’s a scene where Exhaust Pipe (Richard Ng) reads a book on becoming invisible and then attempts to put it into practice that is a total riot. Hell, even the guys’ names are funny: the aforementioned Exhaust Pipe, Teapot (Sammo Hung), Curly (John Shum Kin-Fun), Vaseline (Charlie Chin Chiang-Lin), and Rookie (Stanley Fung Sui-Fan). In addition to being hilarious, there’s an additional element of pure joy poured on top. The theme song — sung by Sammo Hung — tells us to learn to laugh and have a good time with life, and this joyous message is visually transmitted to us in every scene. The plot may be thin, but it doesn’t matter. Just have fun!

And then the action scenes come in and deliver the joyous rush of adrenaline that only ’80s/’90s Hong Kong action scenes can equal. In any legitimate action film these scenes would be huge high points, but because this film is primarily a comedy, they feel like added bonuses; the cherry on top of an incredible sundae. Both sides of the film come together during the third act, delivering a finale that’s as funny as it is thrilling. The action is so skillfully choreographed and staged, and it never ceases to amaze me that no matter how many Hong Kong films I see I’m still picking my jaw off the floor whenever I see something from this era. Movies just don’t get more entertaining than this.

It’s also worthwhile to note that while slowly making my way through Jackie’s catalog of films, nothing previous to Winners and Sinners has felt as immediate and fast-moving (in terms of fight choreography). I’m thinking this is the influence of Sammo and Yuen Biao coming through on the choreography, but it could easily also be the modern-day setting which seems to lend itself more readily to an intensified flow. It’s probably a bit of both. And speaking of “intensified,” I love how they included a super-crazy roller skate chase sequence, most likely as a response to the lackluster, rolling-in-circles roller skate scene in The Big Brawl. Apparently, they had a few more ideas than their American choreographin’ counterparts. 🙂 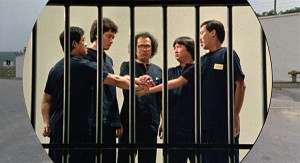 It’s been years since I’ve seen Jackie Chan, Sammo Hung and Yuen Biao together in a movie, and they were just as amazing and impressive as I remember them being — perhaps even more so. I’ve known of their greatness since I was a teenager, but somehow that sense of wonder has never worn off. Jackie isn’t in this one much, and Yuen Biao only has one quick scene, but Winners and Sinners is a great reminder of how incredible these guys are. And to think that the upcoming films in my chronological Jackie Chan series are even better than this!

I don’t know what else to say other than, “Watch this movie!” It’s a blast of hilarious humor, astounding action, and stupendous stunts! Forget your worldly cares and learn to laugh with Winners and Sinners!

Next up in this chronological journey through the films of Jackie Chan is the amazing and wonderful Project A! Oh yeah! See ya then!