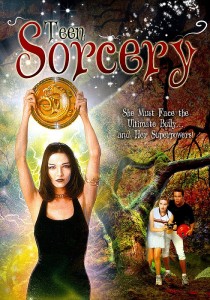 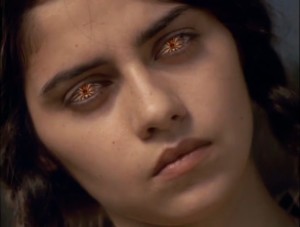 When Dawn makes it to school, she immediately knows that something is off. She asks directions from a random girl outside, but instead of an answer (or even a response), the girl turns around to reveal CG spiders where her pupils should be. Spooky! It all starts to make sense when she visits her locker. The school’s top cheerleader, Mercedes (Lexa Doig), bumps into her to make sure the new girl knows who’s in charge. What a jerk! Dawn is ostracized as the new girl, but manages to find friends when she sits down for lunch with three other outcasts: Flo, Franny and Mary. Together they unravel a spooky history of witchcraft in Pilgrimtown that might surprise you if you were a little kid, but will be obvious if you’re not.

It’s hard for me to look at Teen Sorcery objectively and find fault with it because I honestly did nothing but enjoy myself throughout the entirety of the movie. Perhaps it was the novelty of having a primarily female cast (something rare in these Moonbeam films). Perhaps it was the legitimately good acting from just about the entire cast. The only bad spots are the expected Romanian actors with dubbed-in American voices, but unlike many Moonbeam films, these roles are limited to characters with only a few lines. It probably helped, too, that the last couple of Full Moon movies I watched were of the modern variety where the goal is more to stretch an idea to feature-length than actually make a compelling movie. Teen Sorcery felt stuffed with fun, moving at a brisk pace from one hairy situation to the next. 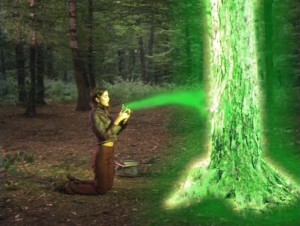 I’m honestly at a loss for what else to talk about. Teen Sorcery has its logical missteps but they occur towards the end of the film and they’re not the kinds of things that hold up the fun. If you’ve gotten that far into the movie, and you’re suddenly asking it to provide realism, that’s more of a personal problem. The film knows it’s ridiculous and its only goal is to entertain, which is does very well. It is something of a cobbling together of various cliches and well-worn stories, though, and this is what really keeps it from being a better movie. Even still, it’s an engaging take on the standard witchcraft movie, which later adds in fun fairy tale and time travel elements. It all adds up to an entertaining 89 minutes, something that many “original” films can’t claim.

Teen Sorcery is not available on DVD, but you can check it out through Full Moon Streaming!

Next time I get around to a Full Moon movie, I’ll be checking out a non-Full Moon movie that’s kinda related: David Keith’s 1987 film starring Wil Wheaton, The Curse! See ya then!