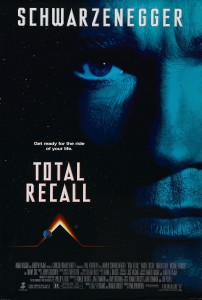 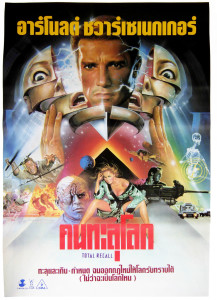 Total Recall isn’t nearly as multilayered and surreal as Dick’s novels can be, but his underlying spirit is there, informing every moment of the film. I’ve been watching this movie for 25 years now, and I’m still analyzing it and trying to definitively understand what is and isn’t “real” in the film. The film succeeds in portraying this theme because both realities of Quaid’s make sense within the film world. If you take the stance that it’s all a dream, there is evidence to support that, and vice versa. It’s a brilliant film in this way. Even the use of the hologram gadget furthers this theme, allowing Quaid to upend others’ reality just as his was yanked from him. This also recalls a related major theme of Dick’s which has kept people talking about Blade Runner since its debut: the simulacra being undecipherable from the real object.

But if Blade Runner is a modern classic that people continue to love and respect, why isn’t Total Recall in that same conversation? Total Recall is definitely a whole hell of a lot more entertaining than Blade Runner, and in a medium expressly designed to entertain that has to count for something, right? My guess is that Total Recall is derided because it’s an action film, and action films in general are rarely given the respect they deserve. I’d also say that Verhoeven’s hyper-violence pushes some people away, and as enjoyable as it is you can’t really argue that the violence is anything but gratuitous. In reality, this question of “Why Blade Runner and not Total Recall?” runs deeper than any single issue. It’s a great example of the art/entertainment split, and for whatever reason the majority of critics and film snobs tend to come down on the side of art. 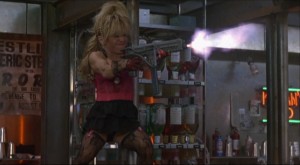 Paul Verhoeven is such an underrated director, too. Just considering RoboCop and Total Recall, the quality of the action filmmaking present in both films should be enough to cement his place in film history. The integration of special effects is also incredibly well done, with the ever-amazing Rob Bottin creating special make-up FX on both films. I’ve meant for years to dig deeper into Verhoeven’s filmography, as I imagine these two phenomenal films aren’t anomalies. I’m busy with too many other series at the moment, but Verhoeven is definitely on the short list of who to cover next.

Next up in this chronological journey through the films of Arnold Schwarzenegger is Kindergarten Cop! Haven’t seen that one since 1991 or something, so I’m pretty stoked! See ya then!