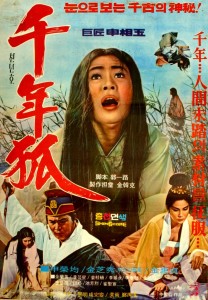 The HKMDB labels A Thousand Year Old Fox as a martial arts film (which is the simple reason why I’m watching it), but while it shares some style and feel of a martial arts film, it does so without the fights which are kind of the base requirement for a martial arts film. What’s unique about A Thousand Year Old Fox is that while it does contain a few altercations, we are never actually shown outward displays of aggression; the action is instead implied between the cuts. This makes the violence take on a metaphysical, mystical quality that perfectly matches the haunted, somber tone of the film. So when Shin Sang-Ok decides to finally show us someone in full view using a sword in a violent manner, it impacts in a cutting way that would have never been possible in a traditional martial arts film.

There is a fair amount of wirework in the film, but it is given a more floaty, atmospheric slant than Hong Kong films traditionally display the effect. The wire-assisted shots are mostly shot in slow-motion, too, and Yeo-hwa, the lone flying character, is always wearing flowing white robes that billow and twist in beautifully mesmerizing ways. Shin Sang-Ok is not only unafraid to show the “swinging” aspect of ’60s wirework, but actually shoots it in slow-motion to accentuate it. In one shot, Yeo-hwa’s gracefully swings down to the ground and then slides a few feet across the floor. It’s possible this slide was a mistake, but it makes the character’s supernatural abilities seem even more powerful. She doesn’t just fly and land, she does so with style. I’m inclined to think it was planned, but my faith in ’60s wirework to be that refined isn’t all that strong based on what the Shaw Studio was crankin’ out at the time.

When I review movies I have a habit of researching the director’s other work, and this time it revealed quite a varied and interesting career for Shin Sang-Ok. As I mentioned before, in the years prior to A Thousand Year Old Fox Shin was regarded very highly within the Korean film industry. His Shin Film Studios were the biggest in South Korea during the ’60s. He eventually started making films in Hong Kong, apparently because of a falling out with the South Korean government. During those years, he only made a couple of films for the Shaw Brothers: the unavailable (and potentially lost) 1971 film, The Bandits, and the 1974 supernatural film The Ghost Lovers. Both films underperformed at the HK box office, which is probably why his next few Hong Kong films were produced independently. But in the mid ’70s his filmography goes silent, because in 1978 Shin Sang-Ok and his wife were apparently kidnapped by Kim Jong-Il in an effort to bolster the North Korean film industry. Yes, you read that right. I’m not sure exactly how many movies he made while being held there, but IMDB lists four, one of which is Pulgasari, a North Korean kaiju movie. Shin and his wife eventually escaped in 1986, and he went on to direct three more films, one of which was the 3rd 3 Ninjas film, 3 Ninjas Knuckle Up. Wow, you never know what you’ll find digging in someone’s filmography!

If you’re in the mood for some classic cinema, A Thousand Year Old Fox is a well-shot, enjoyable supernatural tale (similar in ways to The Enchanted Chamber). Its budget is noticeably lower than the Shaw Brothers films from this era, so a certain amount of slack on the viewer’s part is necessary to make it through without scoffing at every primitive FX shot and flimsy interior set. But for those willing to take it for what it is, A Thousand Year Old Fox is an interesting and atmospheric film worth your time.

The Korean Film Archive was kind enough to upload the entire film with subtitles to YouTube… enjoy!

Next up in this chronological journey through the Shaw Brothers Martial Arts catalog: the mop-up continues with Pan Lei’s 1969 wuxia Purple Darts! See ya then! (Hopefully sooner rather than later.)