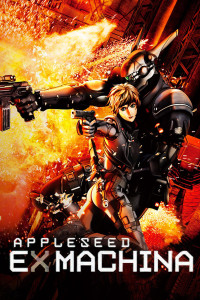 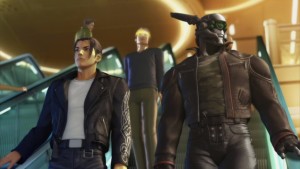 The film honestly feels a lot more like a big Hollywood production than most anime, and I get the feeling they were expecting a big international success for this one. I suppose in comparison to most other anime, they may have succeeded at least a little bit. Still, I’m sure they were all very disappointed that it didn’t implant itself in the public consciousness. These overly optimistic feelings also come through on the DVD, which has a whole heaping mountain of dubs to choose from, including Russian and Portuguese.

The animation is once again pure CGI, and it bugs me even more this time. It’s got better detail, and the backgrounds are without question superior. But it also abandons any real attempt to look like an anime. The 2004 Appleseed used a lot of cell shading effects to carry the look and feel of a 2D anime. While it’s impossible to look exactly right doing so, it did a fairly good job of it, and at times I was able to ignore it, even admire it in fleeting moments. Ex Machina, however, makes no attempt to disguise its CG construction, and that fact was painfully obvious the whole way through. I suppose that’s a personal taste issue, but for me, it never stopped looking like a video game. It didn’t help that the motion capture work was certainly better for the 2004 film. Character movement felt stiff and unnatural the whole way through Ex Machina, which is something that I never really noticed in 2004’s Appleseed. If anything good came out of the visuals here, it is that Briareos’s head looks a bit cooler, and his antennas look more like antennas instead of big metal bunny ears. But then again, that was half of his charm. 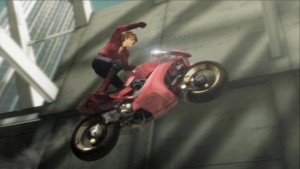 The plot here isn’t all that impressive. Briareos gets injured beating up some bad guys and has to spend some time in the hospital. In the meantime, Deunan must make due with a new partner named Tereus. The new guy turns out to be a clone of Briareos, and all of Deunan’s emotional baggage keeps getting in the way. She’s supposed to evaluate him and make sure that Tereus is as much of a badass as Briareos, which was the whole reason they cloned him in the first place. Then there’s some transparent villains and some weird computer virus that can mind control people. So the investigation is on, and it’s not that hard to figure out where the story is going. It’s also pretty weak on the emotional resonance side, too. It all just felt so typical that I couldn’t really get into it. It felt like the filmmakers were following a blueprint rather than creating something. 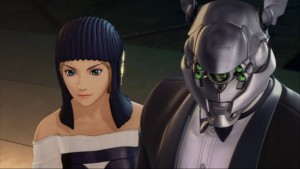 So the plot isn’t all that great, but what about the action? Well, it’s a step up from 2004’s Appleseed, but it still uses the simple, shoot-lots-of-stuff-and-look-cool-doing-it kind of action rather than the smart, tactical action of 1988’s Appleseed. Personally, I still like the original 1988 film’s action scenes better, but at least Ex Machina went far enough to generate some laughter and excitement. It’s really not enough to get me into the spirit of the film, but I did have a little bit of fun with it at least. It often left me rolling my eyes, though. It’s so ridiculous as to be unbelievable. Deunan is now some master acrobat, and Briareos can aim at multiple targets simultaneously. I know I should just be having fun with it and not thinking about how unrealistic it is, but while it was pretty fun at times, it wasn’t fun enough to sit back and forget how silly it was. 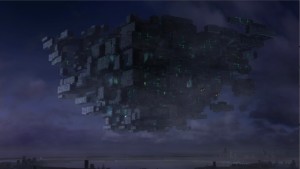 Never is that more true than the final act of the film, which once again pulls something random out of its ass that has nothing to do with anything. But this time it’s not because of the story it’s because of the location. The final showdown takes place on a huge, misshapen Borg cube hovering over the ocean. It’s supposedly an abandoned research facility. My first thought was, “Who the hell would abandon a flying research station!?” You built a fucking Borg cube! Don’t just walk away and let some random hobos move in!

So I’m not all that impressed with Appleseed Ex Machina. It gets some stuff right, or at least entertaining. The rest, however, is just a typical unimpressive action movie formula. Serviceable but unmemorable, Ex Machina continues the trend of mediocrity for the franchise, though I suppose it’s a little bit better than the 2004 film.