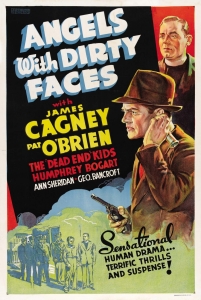 Now Rocky (James Cagney) is out of the joint, and looking to reconnect with his hometown. Why? I don’t think they ever say, but given Rocky’s character it’s fair to say that it wasn’t due to introspection and self-pity. If nothing else, he seems to have been interested in seeing how his old friend Jerry (Pat O’Brien) is doing, whose life has taken a much different path than Rocky’s. Jerry has become a parish priest who is especially interested in caring for the young boys of the neighborhood and trying to help them stay out of trouble. The film never goes into it, but it’s easy to theorize that while Rocky was in prison getting influenced by criminals and other degenerates, Jerry must have found someone who took him under his wing and cared for him so that he wouldn’t fall into the traps that so many kids do. Either that or the simple lack of Rocky’s influence on his life had quite the profound effect. 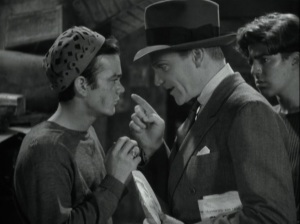 When the old friends reconvene as adults, Jerry doesn’t seem to judge Rocky at all, instead he’s helpful and ultimately just happy to have him around. Y’see, there’s a group of neighborhood kids who hang out in Rocky and Jerry’s old boiler-room hideout (played by the Dead End Kids), and so far Jerry has been unsuccessful in winning their trust or dissuading them away from a delinquent life. Rocky, on the other hand, already has the teens’ respect for being a total gangster badass, so he is almost effortlessly able to influence them towards the positive. He’s still an overall bad influence, but he does try to help out Jerry’s cause.

But the way Rocky goes about it is all wrong. After watching Jerry attempt to referee a basketball game with the rambunctious boys, who play an incredibly fierce and foul-heavy game of Jungle Ball, Rocky steps in to show the father how these kinds of boys are handled. He tricks the kids, stomps on their feet, punches them, you name it, essentially beating them into submission so they’ll play by the rules. What’s most surprising about this scene is that Jerry doesn’t really bat an eye at Rocky’s methods. He surely sees them as just as wrong as Rocky sees Jerry’s, but he’s happy to have gotten any results with these kids. Jerry is seeing the big picture; Rocky and Jerry could affect real change in the lives of these teens if they worked together. 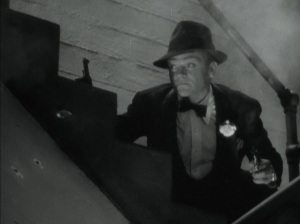 That’s what would happen in a perfect world, and that’s also what would happen in an uplifting movie, but Angels with Dirty Faces is neither. The film depicts a harsher reality, one where someone with a real opportunity to do some good instead chooses to continue the life that comes easiest to him. It’s hard to blame him, though. Like a soldier coming home from war, after years as a gangster Rocky’s just not cut out for civilian life. It’d take a dedicated bunch of friends and family to keep Rocky away from that life, and while the few good people around him try their best, they’re fighting a losing battle. The easy way in life is usually the most harmful to you, and change is something that takes real guts, courage and fortitude. This same basic struggle is something that will continue to play out as long as humans are around, because to struggle with choices and consequences is simply part of human existence. I guess that’s my long-winded way of saying that Angels with Dirty Faces is timeless, even if it is stylistically very rooted in its time.

Angels with Dirty Faces attacks these issues head-on, while also maintaining a high level of fun, entertaining gangster action, including a fantastic third act gunfight that’s gotta be one of the best action scenes of the 1930s. In fact, the entire third act is flat-out superb. Angels with Dirty Faces is a remarkable film that is a definite must-see for fans of classic films, although most have probably already seen it by now!

Angels with Dirty Faces is part of my 2014 Blind Spot Series where I see one movie a month that I feel I should’ve seen a long time ago. It’s all the brainchild of Ryan McNeil over at The Matinee, one of the web’s premiere film blogs. Head over there and check out his Blind Spot post, as well as links to all the other people taking part in the series. And feel free to participate on your own blog as well!