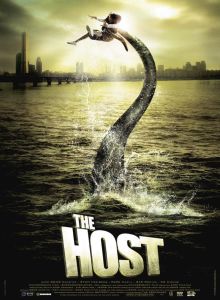 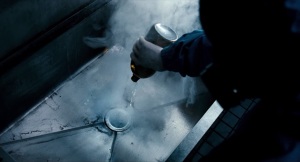 Many years later, we meet up with Hee-bong (Byun Hee-bong) and Park Gang-du (Song Kang-ho), a 60-something father and his adult son who run a food stand by the Han River. Gang may be an adult, but he looks more like a bored teenager than anything else. But he is an adult, as well as a deadbeat dad who is so detached that his relationship with his teen daughter, Hyun-seo (Go Ah-sung), can only be called neglectful. Hyun-seo loves him anyway, though, but she is also clearly embarrassed by his slovenly, lazy nature. The tainted river and story of this family are about to converge here, as Gang-du and Hyun-seo sit down to watch Gang’s sister compete in the National Archery championships. In other movies how the stories come together might be subtle, or even mysterious. In The Host, they come together when a massive mutated fish-beast, capable of walking on land and devouring humans whole, runs up on shore in full view and throws shit directly into the fan. 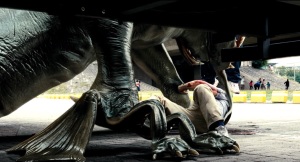 The biggest fault of The Host is that some of the CG isn’t especially great — fire never looks good — but this is honestly a small complaint when everything else is superb. As much as I prefer practical FX over CG, I feel like bagging on shitty CG is just the other side of the coin to bagging on shitty practical FX, which I rarely do. I’m not sure of the budget for The Host, but it’s safe to assume it would be considered low budget by 2006 Hollywood standards. So if I wouldn’t necessarily fault questionable 2006 practical FX, it feels biased to do the same for CG. Besides, very little of the FX work in this film could have been achieved with practical FX anyway, and for the most part the creature in The Host looks fantastic.

There are also a few points to the story that didn’t make sense to me, but it’s possible I missed something. In any case, I never especially cared about this because the film was always relentlessly engaging, be it on an emotional level or a primal “KILL BEAST NOW” sort of way. It’s also hard for me to care too much about this in the face of such wonderful cinematography. Director Bong Joon-ho does an outstanding job at finding interesting ways to shoot nearly everything, utilizing camera placements that intrigue the mind and enhance the emotional resonance of the scene. It’s hard to convey it in words, but The Host looks incredible. 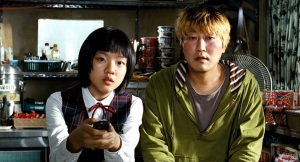 There is also an element of reality to the script that should be applauded. There are consequences to the actions of the characters, and even after years of films ending with everything working out in the end, Bong manages to keep the fate of this family always in question. This is one of my favorite things about films that fall outside the traditional mainstream American bubble: just about anything can happen, so you are constantly guessing and on the edge of your seat. Only the good ones are able to pull this off, but this kind of filmmaking will always impress me far more than anything Hollywood can pump out. I realize it must sound odd to praise the “reality” in a film as outlandish as The Host, but if you see the film it will make sense. Hopefully. Yes, these are wild circumstances, but it feels like it exists in a real world as opposed to a constructed movie-version of a world… if that helps to clear anything up.

If you dig monster movies, The Host is a no-brainer. By straddling the line between tones and allowing them all to shine, Bong Joon-ho has created a true piece of art masquerading as a genre film. It’s a triumph, and comes highly recommended from me!