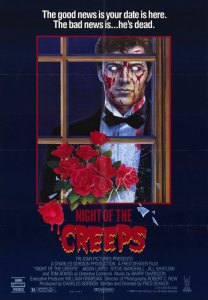 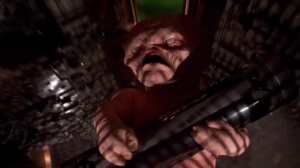 From there, we move into the “present,” or 1986, and from humble sorority house beginnings the film builds into a finale that’s a cross between the hard-boiled detective fiction of Raymond Chandler and a balls-out zombie action film. Maybe it doesn’t sound like it would work, but it does… incredibly well. I’d love to tell you all the awesome delights this movie holds, but you really should just see it for yourself. It’s on Netflix Instant as of right now, so you have no excuse. Unless you don’t have Netflix. If they were paying me maybe I’d say you should become a subscriber. But they aren’t, so find it however you can and watch the shit out of it!

If I’m limiting myself from talking about specifics, let’s talk about the FX. There are slugs in this movie, and they do a lot of slithering around on the ground. I have no clue how they achieved it, but these things rocket across the screen while also looking like they’re doing that worm shimmy thing that any invertebrate would be wont to do if they want to get around. Did they actually do this, or was it a trick of the mind? This is one of those instances where it’s easy to put your finger on exactly why physical FX trump CG. I won’t belabor this fact because there’s probably 894,734 other instances of me or Stephen or Uncle Jasper saying basically the same thing. So yeah, the FX in this movie are fantastic, and also mark some of the first credits for both Howard Berger and Robert Kurtzman, two of the three founding members of the greatest FX group there ever was: KNB EFX Group (which started in 1988, and continues to this day on stuff like The Walking Dead, etc.). 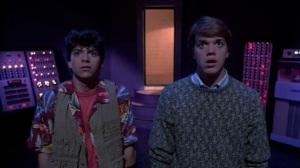 There are many characters to love in Night of the Creeps — Tom Atkins as hard-boiled detective Ray Cameron is hilariously amazing — but I think my favorite was Cindy, played by Jill Whitlow. She begins as a simple love interest, beautiful and existing almost completely as a plot device. But as the film goes on her character develops into one who’s charming, sexy and strong. It’s not the most pronounced arc — this is a b-movie, after all — but it’s a pretty good change of pace compared to what most female characters in horror movies get. Sure, there’s usually a “final girl” or something similar, but rarely do they seem so confident and in charge like Cindy does at the end of Night of the Creeps.

I actually feel deprived that I never got to see Night of the Creeps as a kid. The movie is absolute pure unbridled fun, the kind which is rarely seen in modern films. It’s definitely not a movie that everyone will click with, but if you’re jonesin’ for the good ol’ days when hair was teased out and monsters were made of rubber and latex, look no further than Fred Dekker’s incredible Night of the Creeps. And if you do want to look further definitely check out James Gunn’s Slither, which is a total spiritual successor to this film’s legacy.

Night of the Creeps is part of my 2014 Blind Spot Series where I see one movie a month that I feel I should’ve seen a long time ago. It’s all the brainchild of Ryan McNeil over at The Matinee, one of the web’s premiere film blogs. Head over there tomorrow where he’ll have a post of his own for the series, as well as links to all the other people taking part in the series. And feel free to participate on your own blog as well!

Next month we’re going from creeps with exploding heads to Angels with Dirty Faces!