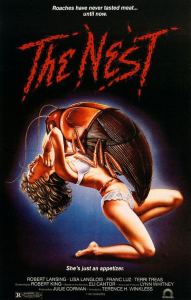 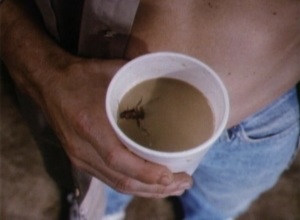 It’s cockroaches! *gasp!* But not just any cockroaches! These are genetically engineered mutant cockroaches made immune to all the normal pesticides. Why would a company create a “better,” harder-to-kill version of an insect capable of surviving literally any epidemic or catastrophe the universe can throw at the earth? I don’t remember the film’s explanation — if there even was one — but whatever it was it’s bullshit! There’s no reason! Oh wait, there is one reason. To make a fun B-movie creature feature!

On that front the filmmakers definitely succeeded, as The Nest just builds and builds its way to some incredibly grotesque shit in its final act. Somewhere along the way, these cockroaches picked up the ability to breed cockroach-infused genetic hybrid versions of anything they kill. While that doesn’t make a whole lot of logical sense, it does make for some great fun. If you ever wondered what a cat-cockroach hybrid would look like, this is your movie. There aren’t as many of these hybrids as I would’ve liked, but the ones that show up are awesome. I wish this movie had a sequel because this idea of cockroach hybrids definitely deserves to be explored in greater depth. 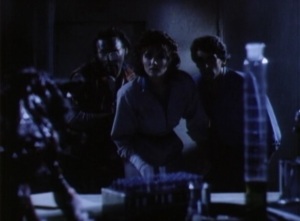 As I mentioned, the overall premise is very “reminiscent” — read: ripped off from — Piranha. But where Piranha was as much of a comedy as it was a horror film, The Nest is played much straighter. There’s definitely humor throughout, though; you don’t play La Cucaracha as a waitress fights for her life with a metal spatula, some hot coffee and a microwave without intending for it to elicit laughs. The hybrid creatures are also inspired moments that blend the hilarious with the grotesque in ways that only ’80s horror movies can.

The Nest tapped into one of my deepest fears and fully realizes what a full-scale infestation of flesh-eating cockroaches and various hybrid cockroach creatures would be like. It does so by using shitloads of actual cockroaches, too, not like the CG cockroaches they’d use nowadays. So yes, seeing thousands of cockroaches on-screen, invading everything from toilet tanks to leg casts, was terrifying to me. I could imagine them all crawling up the back of my chair, and I kept seeing movement just out of the corner of my eyes. I already have the impression that the crawl space under my house is nothing but a breeding ground for the most devious rodents and insects known to man, all just biding their time until they can overthrow the giants who stomp on the roof of their dark world. These “animals as horror movie creature” movies always get me, and The Nest is no different. I can recognize that it isn’t that great of a movie, but it’s definitely fun if you like small-town horror and you have an unhealthy fear of the things crawling around underfoot in the dark.

I should also note that while I watched a VHS copy of the film, it has recently been released in a beautiful Blu-ray/DVD combo by the wonderful folks at Scream Factory. So if you’re a fan of the film, or looking to become one, that is definitely the easiest and most high-quality way to see The Nest.