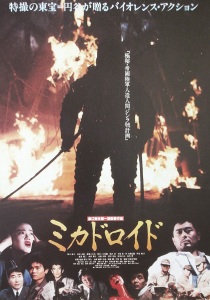 It’s time for some B-movie shlock, my friends. This time it’s coming from me instead of Will, which also means it’s coming from Japan. Actually, I’m still kind of amazed that anyone bothers to make US releases of Japanese B-movies, but here we are, so we might as well make the most of it. And while Mikadoroid is something of a mixed bag, there is definitely enough crazy shit to make a snack out of, if not a full meal, for any B-movie fan.

The film starts off with some cool black and white scenes set in World War II, punctuated by still shots for dramatic effect. This part of the film is actually pretty good as it explains that Japan was working on a cyborg super soldier experiment that might have turned the tide of the war (which I am going to assume is the titular Mikadoroid, not that the film ever says so). But as resources grew scarce, the government decided to cut off funding and shut the project down. But of course, there was one finished prototype that got locked away in the secret lab. Queue the plot of the film, as that prototype wakes up 45 years later to wreak havoc on an unsuspecting underground parking lot. Alright, I’ll admit that with the American title of Robokill Beneath Disco Club Layla I was hoping for more of a rampage inside the disco club, not in its parking garage, but I suppose I have only myself to blame as the title was completely accurate.

After that awesome intro got me pumped for some kick-ass cyborg action, it was time for the movie to let me down with an unnecessarily long introduction to the protagonists of the film. Don’t let that fool you into thinking that there’s any depth of character, though. These people are as one-note as the Mikadoroid that never utters a single line of dialog. There’s really only two major characters here: a hapless electrician who gets called out on a late-night repair job, and a haughty woman who exists to be the clichéd hysterical dead weight of this movie. There’s also a couple of guys who were part of the original experiment who swing by to add some more gunfire to the mix, but they are sadly underutilized.

As much as Mikadoroid wastes time not delving into its characters too deeply, things take a decided upswing once we finally get to all that robokilling we were promised. The Mikadoroid kills people in some incredibly fun and ridiculous ways, using cool shadow silhouette shots that neatly circumvent the film’s low-budget gore FX. (Low budget aside, someone still scrounged up the cash to make toys of the damn thing.) The best is when it whips out a samurai sword and starts hacking up a helpless woman, over and over again, somehow ripping off all her clothes in the process. There are also no injuries on the woman at all, though she is covered with blood as if it were body paint. That might not sound all that incredible, but trust me, words do not do justice to the event as it plays out on-screen. 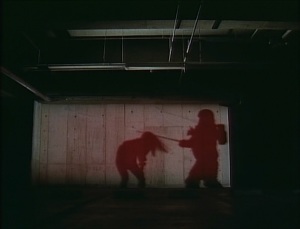 It looked like this film would rise to the top of the heap for awesome B-movie hilarity, but all too quickly it got to the next phase of the story: the running-away-in-terror phase. We only get a few, though highly entertaining, kills before the lead characters run away from the Mikadoroid by heading straight into the underground lab that spawned it. And while the lab is pretty damn cool looking, it has an immense lack of robokilling inside. In fact the Mikadoroid is outside in a gunfight for most of this section of the film, and we don’t even get the satisfaction of seeing it. Instead we just hear gunfire as the two leads blunder around in the 50-year-old basement refusing to even develop their characters. Most of the last half of the film is this much less interesting part. I know that if you go to all the trouble of making a really cool looking, creepy laboratory set you want to milk it for all it’s worth, but it would have worked out much better if they also had the decency to have the Mikadoroid chasing people around down there and adding to the suspense. The only bit of amusing silliness here is that the main characters have suddenly changed their clothes somehow upon entering the lab. 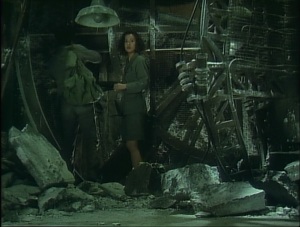 But don’t give up just yet, as Mikadoroid has one last trick up its sleeve for the final showdown, which is as fine a piece of Japanese WTF as I have ever seen. Even if you get fed up with the film earlier on, do yourself a favor and skip ahead to this final bit of madness. It’s got random spider legs bursting out of someone’s body, and it has not even the slightest shred of explanation. Nor does anyone else present show the slightest bit of surprise at this. I don’t know about you, but even if I had just been chased through a derelict lab by a homicidal cyborg, that shit would still freak me out. I guess that was a bit more of a spoiler than I usually like to give, but I’ll leave it up to the intrepid viewers out there to find out for themselves just who this happens to and what those spider legs are for.

Mikadoroid can be pretty dumb, and it can be pretty slow. But if you’re a B-movie fan you’re probably used to that, and if you’re willing to wade through the less enjoyable parts, there is some really great stuff buried in here.