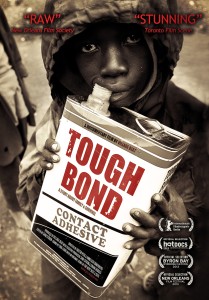 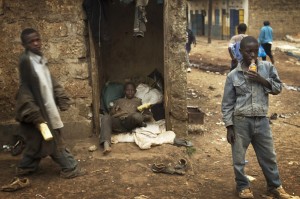 The surface concern of the film is how the street kids use the glue, but the overall theme is one of Kenya’s changing society. As Western culture dominates and globalization occurs, Kenya is losing its cultural identity. Its people are developing an individualistic spirit where one of communal culture once existed. The glue manufacturer is the epitome of this problem; as long as the money is rolling in, he doesn’t much care what his glue is used for. Perhaps he uses his own glue to get himself to sleep at night.

The power of Tough Bond lies in its imagery and how it pushes forward its themes without the use of standard documentary crutches like on-screen facts and narration. The structure of the film itself tells the story, making it a very involving and engaging documentary that requires the audience to be actively thinking for the piece to fully make sense. The film opens in a small lakeside village with wide-open, barren vistas and children at play. We slowly come inside one of their huts to find a pregnant woman on the verge of birth. There is no dialogue, music or any other augmentation to the footage. It is raw and simple, reflecting the lives of the people living in a small village near a lake in the north of Kenya. 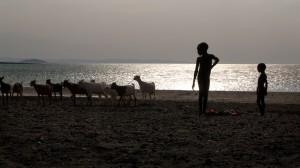 As the film moves on, we are introduced to kids living in progressively larger and more urban environments. With each new town or city, the problems are exacerbated and more widespread. Along with these increasingly distressing visuals are the comments from the glue manufacturer, as well as a rather out-of-touch conversation with the Kenyan vice president. The juxtaposition of the raw images with these men’s dismissive words is striking and powerful. While the film’s editing is clearly playing up these elements for maximum effect, I get the feeling that there is no biased tampering going on here. The men’s words speak for themselves; the filmmakers have merely made their negligence to the country’s problems more obvious. And the root of the issue is that classic Western idea of the individualist spirit. If the people of Kenya had rejected this and cared more for their culture of community, it is easy to assume that the problems would have never gotten as bad as they have. But such changes always happen gradually, and it’s easy to say such things now with the ramifications laid out before me.

The kids are hopeless in their poverty and turn to glue as a means to cope. The social worker interviewed seems even more hopeless, as she can see the problem but is essentially powerless to do anything about it. The filmmakers ultimately call for action during the film’s credits, but with such a deep-seated problem, it’s hard to know what will help. A return to communal living with a rejection of Western ideals, for sure, but a change like that in corrupt, over-populated urban areas is not much more than a dream. I want to be an optimist, but I feel about as hopeless for the situation as the social worker in the film.

Tough Bond was an official selection at Hot Docs 2013 and it’s available starting May 9th in the US and Canada via iTunes, Amazon, Xbox, Playstation and Video-On-Demand!