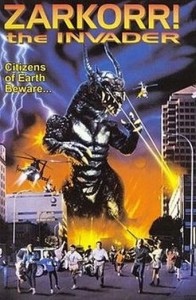 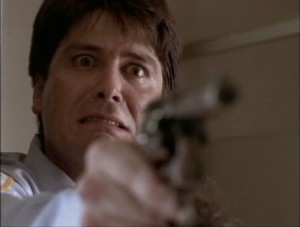 From here the film only gets more ludicrous as it goes along, and by ludicrous I mean hilarious. Imagine if you were a postal worker who had no resources and were tasked with defeating a monster roughly 180 feet tall. You’d be ludicrous too. In this way, Zarkorr! the Invader offers a hyper-realistic take on the kaiju genre, asking the big question of “How does an average man deal with insurmountable odds?” In this situation, we’d all be grasping at straws, but through the struggle of Tommy the postal worker we are reassured in the power of humanity’s survival instinct. Now that I think of it, Zarkorr! the Invader just might be the high-point of ’90s philosophical filmmaking.

There are moments of acting in this film that defy words. It’s almost like acting in this film was some sort of sick Saw-like game, where if the actors didn’t express all their emotions with every facial muscle possible, their children would be ripped apart by rabid wolves before their eyes. The people in this movie act their faces off; there was so much raw emotion flying around that no amount of Botox injections could hope to freeze these expressive faces. 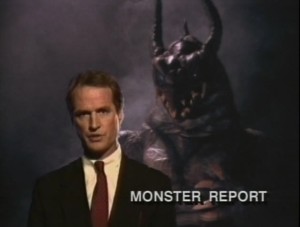 Much to my surprise, Tommy does end up convincing others to join his noble cause, and about the time they reach the hacker (it’s a ’90s movie… of course there’s a hacker), I started to think that Zarkorr! the Invader felt more like the pilot episode to a kaiju TV show than an actual movie. I mean we’re 45 minutes into a 78-minute movie and everyone’s still completely clueless as to what to do. Don’t worry, we’ll get Zarkorr! the Invader on the next episode of Zarkorr! the Invader. But no! This is a movie! The postal worker must save the Earth from total annihilation within the next 30 minutes!

But enough about how hilarious and exciting and philosophical and emotional Zarkorr! the Invader is; Let’s talk about the monster FX work. I’m just going to cut to the chase: it’s a dude in a suit crunching and stomping miniature sets and shooting laser beams out of his eyes into every radio tower, farmhouse and tenement building he comes into contact with. Which is to say: AWESOME AWESOME BOOM! AWESOME AWESOME AWESOME LASER BEAMS! AWESOME ZARKORR! AWESOME! The scenes don’t really have much to do with the plot of the film — they are cut in-between scenes of Tommy “gathering his followers” — but who am I to argue with explosions and laser beams? A better man than I once said, “You take the bad with the good, but laser beams and explosions are always fucking awesome,” and it’s never served me wrong yet.

Zarkorr! the Invader may not excite and delight you like it did me, and I’m sorry for you. Like a Christian who wishes for a heathen to one day find a place in their heart for Christ! the Almighty, I too wish for each and every resident of this great planet of ours to be able to find a place in their hearts for Zarkorr! the Invader! Highly recommended.

Next time on Full Moon Tuesday, I’ll be checking out the second Full Moon kaiju film, Kraa! the Sea Monster! See ya then!