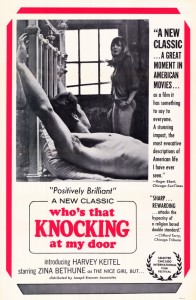 Expectations: Moderate and very interested to see where Scorsese began.

There’s no dispute that Martin Scorsese is one of the great American filmmakers, so watching his debut film for the first time is something of a loaded experience. Who’s That Knocking at My Door? is definitely not at the same level of quality that his later films deliver, but it shows flashes of his brilliance throughout (though, surprisingly, no Rolling Stones songs 🙂 ). Harvey Keitel also makes his debut here, so even if it’s not an exceptionally great film, it marks the beginning of two great careers in American cinema.

The story is rather loose and free-flowing, like something of an American take on the French New Wave style. There are also elements of the great neorealist Italian films of the ’50s and ’60s, so Who’s That Knocking at My Door? carries a distinctly European flair while also being rooted deep in its New York setting. While this is interesting and admirable, Scorsese is rather blunt about this, having Keitel go on and on about a picture of John Wayne in The Searchers appearing in a French magazine read by a woman he meets (and later falls in love with). At the time I just thought it was a way of Scorsese slipping in references to movies he liked, Tarantino-style (and it is some of that), but it’s clearly a way to push the film’s American identity forward while also tell us something about the main character’s psyche. 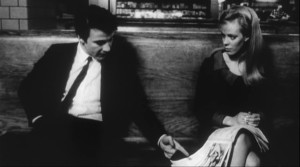 While the story is rather meandering and the chronology of the events seems rather loose and hard to decipher at times, everything in the film is attempting to build a picture of who J.R. (Harvey Keitel) is under the surface. He is ultimately a character that sees the other sex in stark black & white. There are girls and there are broads. Nice girls are for marrying, while broads are for getting your kicks. Loving The Searchers reinforces J.R.’s tunnel vision, as the John Wayne character in that film is similar in his racist world view.

The most interesting aspect is how the film deals with Catholicism. The film opens with multiple shots of a ceramic figure of the Madonna and Child. This is crosscut with images of a mother preparing food, and then serving it to her children. We later learn that J.R. was one of those kids. We never see or learn any more about his childhood, but we’re given the impression it was one of religion, tradition and family. The adult J.R. seems to have distanced himself from these things, while still hanging on to his mother’s ceramic figure and some of the moral code instilled in him at a young age. But like John Wayne’s character in The Searchers, his upbringing blinds him to the subtleties that people possess. 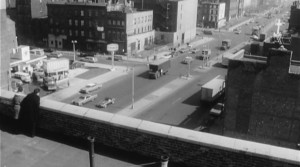 To me, J.R. was a complete dick of a character. Unlikeable and unabashedly selfish, the film builds a case against him rather well. I don’t know that this was Scorsese’s intent, but it was definitely my experience. After much moral wrongdoing, J.R. visits his local church and gives his confession to the priest. He doesn’t see the flaw in his actions per se, but he knows he’s done something that he must be forgiven for. The movie ends shortly after this scene, with J.R. telling his friend that he’ll see him tomorrow. Confession given and conscience clean, J.R. is ready for a new day… life goes on. To me, this makes the film feel like quite the indictment of the Catholic tradition, allowing an asshole like J.R. piece of mind despite never actually feeling sorry. But maybe that’s just my lapsed Catholic brain reading more into a film than there is.

Who’s That Knocking at My Door? is a very challenging film that feels raw and real and poignant, while also carrying something of a dated, pretentious air. I can’t say that I liked it all that much, but there are many flashes of the directorial power that Scorsese would reveal in full in later films. A very important flashback scene is especially well done, with Scorsese’s excellent use of sound and music showing itself even here in his first feature. Scorsese fans will definitely want to check this one out, but others would be better served with his more well-known work.

Who’s That Knocking at My Door? is part of my 2014 Blind Spot Series where I see one movie a month that I feel I should’ve seen a long time ago. It’s all the brainchild of Ryan McNeil over at The Matinee, one of the web’s premiere film blogs. Head over there tomorrow where he’ll have a post of his own for the series, as well as links to all the other people taking part in the series. And feel free to participate on your own blog as well!