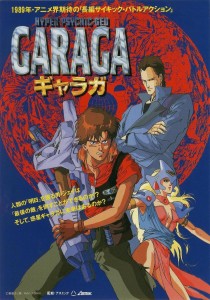 Garaga tries to deliver an action-packed sci-fi epic, and to its credit it is filled to the brim with tons of robots, aliens, and spaceships that are all in a massive tangle of conflict. Honestly, all the parts are there for a great adventure. Unfortunately, they aren’t put together well enough to make it work. It’s too jumbled to make a good story, and the action scenes come off too bland to be viscerally entertaining. Add in a few plot holes and you have a thoroughly lackluster film. A lack of any quality animation doesn’t help matters either.

It starts with the crew of the spaceship XeBeC making a special delivery. They’ve got a general’s daughter in cold sleep, and they need to take her… somewhere. It obviously isn’t all that important since the film never mentions where they are taking her or why. But the ship has been sabotaged, and they crash-land on an unknown planet (OK, not really, it’s actually the planet Garaga) filled with violent ape monsters that want to kill everyone. And this is where the original destination ceases to mean anything, especially since it seems like everyone on the ship was headed to Garaga anyway. I almost thought they were stranded at their destination. 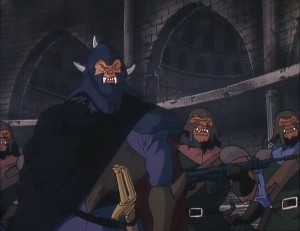 Pretty much everyone on the ship has a secret agenda, and all of their agendas apparently revolve around the general (and you get an idea how bland the film was since I can’t remember his name), who just so happens to be living on Garaga and genetically altering the natives to do his dirty work. From here on out the film turns into a massive clusterfuck of sudden revelations that some other guy also has a secret mission to stop the general’s evil plot for completely different reasons. There’s also a bunch of psychics that live on Garaga, and guess what? They’re at war with the general and his ape soldiers, too. Oh, and they’ve got all sorts of people with their own hidden agendas on top of all that.

And somehow, all of these people who want to take down the general can’t seem to just get along and wind up fighting amongst themselves the whole time. It’s all a jumbled mess without any sense of direction. Is it about humans oppressing the poor peaceful natives? Is it about robots trying to take over the galaxy and destroy all organic life? Is it about a girl finding out that daddy isn’t the big hero she thought he was? Is it a revenge story? The movie can’t make up its mind what kind of story it wants to tell, so it tries to tell all of them at once. As a result it’s impossible to identify with any of them. 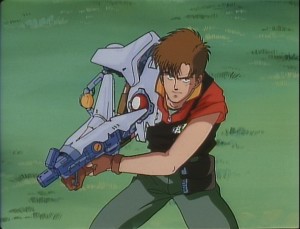 Good action scenes could have made up for this, but those don’t do the job either. They’re certainly plentiful enough; it’s just that they’re so bland that they couldn’t even drag my attention away from the carpet. About the only interesting bit is the wacky, robotic, arm-laser sword thing used by Jay. He’s supposedly the main character except that the film is so unfocused it’s hard to say it has one. This goofy contraption is clearly set up to be the defining cool gizmo of the movie with its special transformation scene, but Jay only breaks it out twice over the course of the film, and even then it never really lives up to the hype.

Another of Garaga‘s problems is a lack of any kind of foreshadowing. Plot twists come out of nowhere and feel like some tacked on random bit of confusion rather than an integral part of the story. The characters’ reasons for being there are slipped in through minor bits of dialog and then never elaborated and are easily forgotten. There are some great ideas buried in these brief throwaway explanations that could have been elaborated on if the film had actually chosen to delve into them. One of the best moments was when the humans compare their need for privacy with the psychic race, which has no concept of privacy since they can all read each other’s minds. This could have delivered a very interesting story if it weren’t immediately forgotten and then contradicted by one of the psychics somehow lying to his daughter. 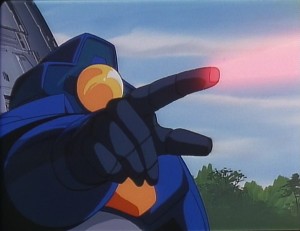 There are also some goofy ideas thrown about that offer a bit of hilarity, such as the finger lasers on the giant robot soldiers. But the real hidden gem is the English car advertisement transcribed onto a computer screen that is supposedly explaining the villain’s secret plot involving brainwashing and robot armies. I also loved the brilliant Engrish login screen that reads, “You need another ward to next FAIL.” But these moments are too few and too fleeting to make it worth digging through the film for.

Garaga is pretty unimpressive all around. It’s certainly not good enough to be a satisfying story, and it’s not horrible enough to be either hilarious or repulsive. It’s just bland and forgettable.