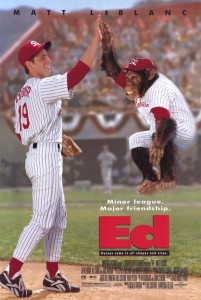 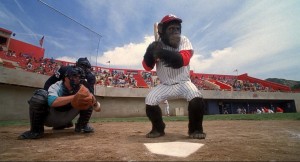 But by mentioning this simian designated driver, I’m getting ahead of myself. Matt LeBlanc plays a farm boy from Oregon who has one hell of a pitching arm. He lands a job on the Santa Rosa Rockets, a minor league team in the bay area of sunny California. He’s on the team’s naughty list, though, so after the game the coach gives him the job of picking up a new player at the bus station. And… DUN DUN DUN!!!!! IT’S A CHIMPANZEE!!!!!!!!! But wait! It’s not just any chimp, it’s MICKEY MANTLE’S CHIMP!!!! And guess what??? He’s one hell of a ball player! This would be the natural place to say, “Hilarity ensues,” but hilarity is far too strong a word for the laughs that Ed brings. So, I guess I’ll just say, “Mild grunts of approval ensue!” Or if you happen to be reading this with your chimp, that’s: “Ooo Oooo Aa Aa Aa Ooo Ooo WAHAHAHA WHAHAHAH Ooo Ooo!” Subtlety is one of those things, like fully opposable thumbs, that separates us from chimps. 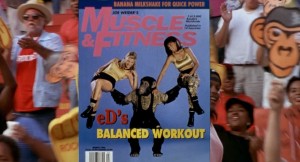 Probably the most hilarious thing about the movie is how it gets over the logic hurdle of having a chimp playing on a human ball team. It’s not a funny moment, but it just shocked me into laughter that they did it how they did it. The coach of the Rockets (the ever-wonderful Jack Warden) gets a crazy idea to throw Ed into the game, but when they walk out onto the field, the opposing coach completely rejects the idea and says something that could easily be seen as a racist remark against non-white players. The umpire, a black man, does not take too kindly to this, so he lets Ed into the game… but not before the camera moves to a flattering, heroic angle and the ump delivers a civil rights speech about the game being for any race, creed, color or species that wants to play it. Again, it’s not a funny moment per se, but it shows how Ed is far more audacious with its jokes than I would have expected a PG-rated, mainstream family comedy to be.

As for its representation of the game of baseball, it does a fair job. It’s a kids movie so that’s about the depth you get to everything, from the baseball drama to the romance to the dumb monkey jokes, and so on. Jack Warden and Bill Cobb are fantastic together as the managers of the Rockets, giving the film a couple of good father figure characters for LeBlanc and Ed. The baseball is rather boring until they bring Ed out, though, so if the filmmakers were trying to replicate the lackluster vibe of the Rocket’s stadium crowd in the film’s audience, than they succeeded. But even the best humans would have a hard time against a back-flipping, baseball-playing monkey who lands on the cover of such magazines as Sports Illustrated, Muscle & Fitness and Teen Beat. 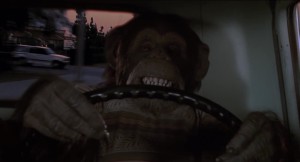 Ed is kind of like a live-action cartoon, a fact rammed home by the crosscutting in a scene where Ed and his neighbor friend have a wild slumber party while a 1930s cartoon of a monkey going… apeshit… plays on the apartment’s TV. This then leads to a great montage of the chimp and the kid cleaning up in fast-motion, with Ed scrubbing the kitchen with all four limbs at once and then stuffing everything that was out of place into the hall closet. Which reminds me, there was a fun “Take Me Out to the Ballgame” montage during Ed’s rise to fame that was pretty enjoyable. In any case, it’s clear to see that I liked Ed enough to be focusing on its good points instead of mercilessly berating it for its faults (one of which is Matt LeBlanc going through the movie looking like he took about 50 too many trips to the spray-tan booth before filming began).

Like all kids movies, Ed features a message. The main one is that all work and no play makes first-year recruits choke up in the clutch. Now if only I had seen parts of this movie when I was a little kid instead of parts of The Shining, my life could have taken a completely different path. I could have learned the same lesson but without developing an unhealthy fear of twins and a love of horror. Oh, the humanity! Ed isn’t anything special but it does offer up enough dumb fun for a forgiving viewer to waste an evening with.

This review of Ed is my entry in the Forgotten Films Big League Blogathon! Head over there tomorrow and there should be a post linking to this review along with a whole bunch of other baseball related posts for those inclined. The amount of monkey antics and fart jokes included in those other reviews will most likely be much slimmer than it was in this one, though.