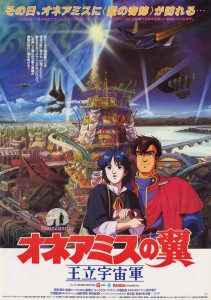 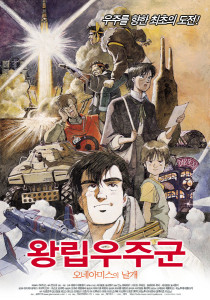 Honnêamise is set in an alternate world where mankind is trying to launch its first manned space flight. But unlike the inspiring years of Kennedy and the patriotic fervor of the Cold War, this world is pretty unconcerned about it. The space force is technically a part of the military, but since it has no combat abilities, it is derided as useless and mired by lack of funding, especially with war growing ever nearer. Even the personnel of the program itself are rather uninterested in actually fulfilling the program’s goals.

The film centers on Shirotsugh Lhadatt, the man chosen to be the first astronaut. He starts the film as purposeless and uninspired as everyone else on the team, but then he meets Riquinni, a girl handing out religious pamphlets around town. After talking with her, she tells him how wonderful it would be to go into the pure and unsullied vacuum of space and get away from all the sin and cruelty on the ground (I can’t really say “Earth” since it doesn’t take place on Earth). Shiro is filled with a burning passion to impress the cute girl, and throws all his energy into his impending space flight. It also introduces us to the film’s central theme, trying to rise above (in this case literally) our baser human instincts.

And Shiro certainly has his share of base instincts. As Riquinni continually rebuffs Shiro’s advances, he reaches a breaking point and tries to rape her, forcing her to bludgeon him unconscious with the household decor. And Riquinni is such a pacifist that when Shiro apologizes the next day, she instead blames herself for attacking him. I spent the rest of the film struggling to find a good explanation for why the scene was in the film. My only explanation is the obvious one: Shiro is as flawed as any other characters, and he too must rise above his nature to become a better person. But as apologetic and remorseful about it as Shiro is through the rest of the film, can you really forgive a guy for rape? Cultural differences aside, it’s a hard scene to take, and I do wish they had come up with something less repugnant as a way to illustrate the themes of the film. I wouldn’t argue with anyone wishing to bow out of this film because of that scene. 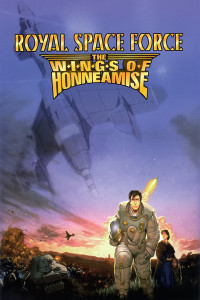 I suspect that for many viewers the rape scene will overshadow all the other aspects of the film, which is a shame, because that is the only real problem with the movie. The pace can be a tad slow, especially towards the beginning, but anyone heading into this film ought to know that they’re getting a more thematic experience than a visceral one. I particularly liked Shiro’s speech at the end of the film, which tied together the themes of needing something above us to strive for quite well.

On the animation front I was rather disappointed at first. Largely this is because of all the hype surrounding this film’s visuals. Honnêamise is always heralded as a gorgeous and masterfully animated film, so I was expecting something far more impressive than what I got. My other big mistake, though, was thinking this was a ’90s anime, a misconception that the animation fully fueled. It blew my mind when I finally found out that it actually predated Akira, one of the first films to spawn a resurgence of quality animation on into the ’90s. For an ’80s anime Honnêamise is quite impressive. It looks like a ’90s anime, and by that I mean the design and visual style as much as the animation itself. Some of the earliest trailers featured very different character designs that were eventually abandoned. While watching those old trailers, I said to myself, “Damn this looks ’80s all of a sudden.” Clearly, Honnêamise was one of the first to start shaping the visual design and style towards what are now typical anime features.

There’s some quality storytelling and a lot of creative designs in this film, as well as some profound commentary on humanity. It’s an overall solid film for those who want some more intellectual fare. You’ll just have to tolerate the rather disturbing fact that the hero of the story tries to rape someone. If that’s too much for you, then pass it by and save yourself the headache.