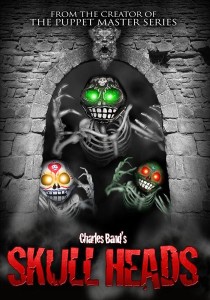 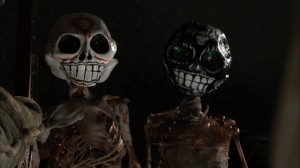 Anyway, back to the rack! You’re not getting off that easily! Why is Naomi being punished, you ask? Because she’s been caught with a cell phone — or as her father calls it, “The Devil’s Earpiece!” The Arkhoffs don’t mix well with outsiders, and they have a strict policy of not allowing any of their family to leave the castle grounds. Naomi is more of a free spirit with dreams of being able to enjoy music and all the good things that 2009 offered. This is but the tip of the creepy family iceberg, and it only gets weirder from here!

The film contains a few good weirdos, but by far my favorite is the guy that doesn’t really do anything the whole movie. His presence is foreboding and I got the feeling that he was always watching everything that went on in his house, despite being confined to his bed. No idea how he’d do that, but y’know how these supernatural movies can be. Anyway, who is he? He’s the Arkhoff grandfather! The characters come to ask the patriarch for his favor or advice. As far as I could tell he never said a damn word, but that didn’t stop the family from listening to the advice he gave! The best part is the shot of his face that Charles Band cuts back and forth between for reaction shots. His face is vague and barely visible through a sheer bed curtain. You see facial features so you know someone’s on the other side of the curtain, but you also know that he’s pretty fucked-up looking even though you can’t make much out. Perhaps I’m just easily amused, but I loved this character and how he was realized. 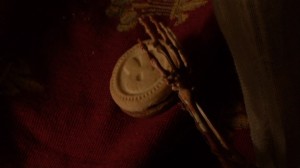 The grandfather is also our conduit to the skull heads of the title. These little creatures first appear during the scenes with the mysterious patriarch, stealing the old man’s pasta noodles and cookies. I don’t want to say too much else about them, except that I loved them. As I said before, the budget of Skull Heads isn’t much so these little guys don’t get a lot to do (and what they do is largely done with cheap CG), but none of this changes the simple fun their presence brings to the film. They are yet another enjoyable element in a thoroughly enjoyable B-Movie, so I can’t ask for much more than that.

A return to form for Full Moon, Skull Heads carries the unmistakable vibe of the company’s early days. Your enjoyment of the film will hinge on your interest in creepy family dynamics and Italian castle architecture, because the horror here is more “fucked-up family” than “slasher chases.” In fact, there’s none of the latter, and despite the title the skull heads are merely window dressing to the creepy family than actual lead players. But it makes for a much better title than Creepy Family, or even The Arkhoff’s Secret or some other nonsense. SKULL HEADS! It was dope, I loved it!

Next time on Full Moon Tuesday, I’ll be checking out the Moonbeam film Planet Patrol from 1999, never released to DVD but recently added to Full Moon Streaming! See ya then!